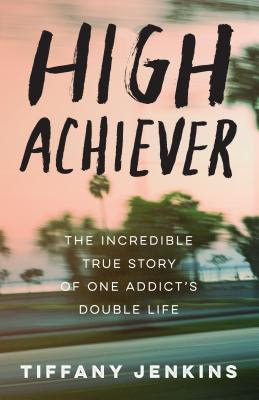 This month's book club selection comes from a library book club kit. Some librarian selects it because he/she thinks it will lead to a good discussion, buys 15 copies, and makes it available for checkout to book clubs like mine. I often think, wrongly I might add, that these books are selected for their literary merit which often they are not not. Anyway, here we are with a narrative nonfiction choice High Achiever: The Incredible True Story of One Addict's Double Life by Tiffany Jenkins.

Tiffany was a relapsed drug addict who happened to live with a sheriff deputy. Like most addicts she lied, stole, and thought she was pulling the wool over everyone's head when she got arrested for, wait for it, stealing the deputy's service weapon. This book is about her experiences before and after being arrested and during her time in prison. Tiffany reveals a bit about her life as the story unfolds---abandoned by her father who is an alcoholic, unresolved grief abut the cancer death of her mother, and a sister who doesn't want to put up with her sh*t anymore. She also details how she got and used her drugs, with the downward spiral really obvious. It was only a matter of time before death or prison happened. Luckily for Tiffany, she got caught and went to prison, where a lot of bad stuff happened to her, but she also made contact with a justice system that steered her in the right direction toward rehabilitation and sobriety.

As I read the book, with all its lurid details of the life of a drug addict or life in prison, I thought to myself how much the gals in my book club would be offended by the theme and the language. I was wrong. The very first person I talked to about the book, an 80-year-old grandmother, said she loved it and couldn't read it fast enough. Guess I should have withheld judgment.

For me, the story just didn't ring true consistently or the details (or lack of details) just didn't seem to be giving the reader the straight scoop. And now that I am a little bit woke about "White Privilege," I found myself irritated with Tiffany's assertions that someone like her shouldn't end up in prison. "Someone" being defined as a white cheerleader type. Ugh. I won't be recommending this book to anyone but I do understand why the librarian chose the book for a kit. It will likely be a good discussion starter for sure.

P. S. I am having a hard time locating discussion questions on the book so I decided to use these generic questions for nonfiction books in general.

P.P.S. The gals in book club expressed gratitude for this book for its horrible depictions of addiction. Several of the gals said they realized as they read it that addiction isn't something that can just be undone by will.