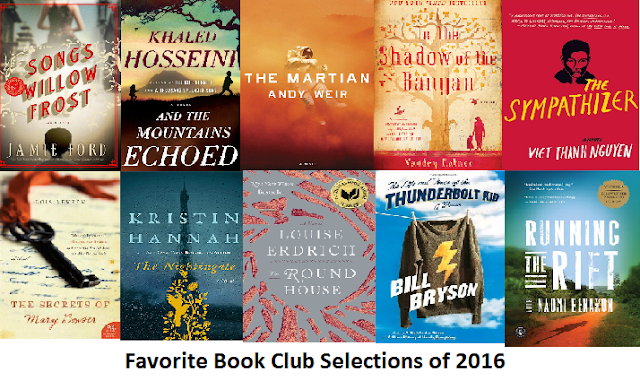 2016 Book Club favorites. I am in two book clubs. For this reason sometimes books will end up on my end-of-the-year list more than once. This year I asked the gals in my clubs, SOTH and RHS, for feedback. Their top three selections will be noted within my list of favorites. Keep in mind I select my favorites based not only on how much I liked the book but also on how well the book generated a discussion. I also factor in an educational aspect. Did I learn something new by reading the book?  If so, bonus points.

1. In the Shadow of the Banyan by Vaddey Ratner
An unlikely winner considering the subject matter: the reign of the Khymer Rouge in Cambodia and the devastation on the lives of the people involved. But this book was exquisitely written, simply gorgeous. We had a fabulous discussion about the book and about this despicable event in history. In fact this book generated the best discussion of the year, hands down. (SOTH #3)

2. The Nightingale by Kristin Hannah
Set in WWII in France this book looks at the lives of two unlikely heroes, sisters who assist the resistance and end up helping save the lives of RAF airmen and Jewish children. I was completely swept up in the sotry, which is based on an actual female hero of the war. (RHS #2)

3. The Secrets of Mary Bowser by Lois Leveen
Mary Bowser was a free black woman who learned to read and write. She chose to live as in slavery to become a spy in the home of Jefferson Davis, the Confederate President. She transferred information to the Union army. Once the Civil War ended her life retreated into obscurity but is remembered here in a fictional account based on what the author was able to obtain about her life. We had an excellent discussion about this wonderful book. (RHS #1)

4. The Sympathizer by Viet Thanh Nguyen
Wow. What a book. It takes a look at the Vietnam War from the eyes of a double agent, written in the form of a confession. This book won the Pulitzer Prize for Literature this year for good reason. This is not an easy book to read, and in fact several gals in my club would not place this book in the top ten of the year. I listened to the audiobook, which may have changed my experience of the book. I found the book to be surprisingly funny in parts. (RHS #3)

5. The Martian by Andy Weir
This book was a crowd favorite. The book is so well written and exciting. I don't recall our discussion being especially insightful, though. We all just loved the book. (SOTH #2, tie)

6. And the Mountains Echoed.by Khaled Hosseini
Hosseini is truly a gifted writer and this selection is right up there with his other books in terms of scope and writing. In fact, this book accomplishes an almost impossible task of bringing together a plethora of unrelated stories and tying them all together by story's end. I was surprised when the gals in the club voted this book so high on their favorites of the year, however, because I didn't think we had a particularly good discussion on it. (SOTH #2, tie)

7. Songs of Willow Frost by Jamie Ford
Set in Seattle in the 1920s and 30s, this is the story of a young Chinese-American boy who is abandoned/orphaned by his mother, a famous and beautiful singer/actress. This is their stories, the mother's and the son's. I wasn't a huge fan of this book but other gals in the club really liked it and found it very readable. Several commented on how they didn't want to put the book down. It was interesting from the angle of what the early movie industry was like in our country and how Chinese-Americans were treated. We all enjoyed the references to sites in Seattle, too. (SOTH #1)

8. The Life and Times of the Thunderbolt Kid by Bill Bryson
Bill Bryson, in his autobiography also gives his readers a biography of two decades, the 1950s and 60s. Many of the gals in the club grew up during those decades, myself included, and we had such a fun discussion about those years.

9. Round House by Louise Erdrich
Erdich is an amazing writer. Here she writes a mystery and a coming-of-age tale about a boy who is trying to uncover the events which changed his mother's life. When he discovers those answers he and his friends set out with revenge on their minds. Set in an American Indian reservation in North Dakota, the reader is not only treated to an excellent mystery but learned about injustices in our Justice system which do not favor Native Americans. It gave us a lot to talk about.

10. Running the Rift by Naomi Benaron
This year was a the year for reading about war and conflicts around the world: WWII, Civil War, Bosnian Conflict, Vietnam War, the conflict in Cambodia, and finally, The Rwandan Genocide in this book. Benaron helped us, the readers, understand about the conflict and tensions in Rwanda which led to the horrific genocide which killed nearly 1 million Tutsis in the 100 days of the conflict. We had a lot to discuss and to digest.

Posted by Anne@HeadFullofBooks at 12:07 PM