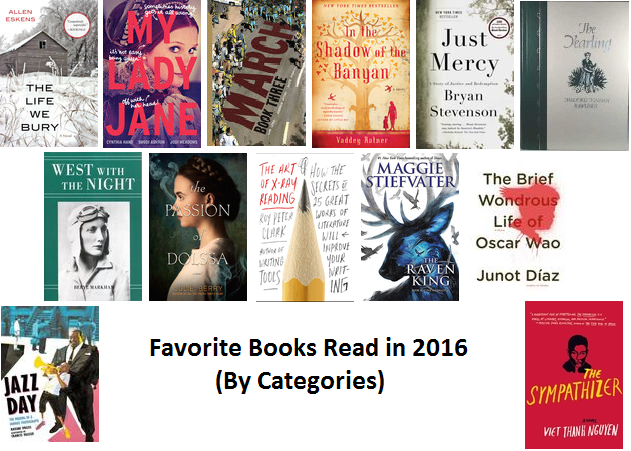 In alphabetical order, here are my favorite books in each category that I read in 2016.

Jazz Day: the Making of a Famous Photograph by Roxane Orgill
(Children's Poetry)

The Life We Bury by Allen Eskens
(Mystery, Adult)

The Passion of Dolssa by Julie Berry
(Historical YA Fiction)

The Raven King by Maggie Stiefvater
(Audiobook and Book In a Series, YA Fiction)

West With the Night by Beryl Markham
(Autobiography)

It is both a fun and a frustrating exercise selecting a list of favorite books. It is fun looking back on the books read during the past year and thinking about what else was happening during the same period when the book was being read. For example, Don and I listened to the audiobook Just Mercy on our way to and from a vacation at Whistler, B.C. and The Sympathizer during a long weekend in Oregon to watch a football game. This events undoubtedly enhanced my feelings about the books.
The frustration comes from not being able to put every book one likes on the list and finding some niche for it. A case in point is selecting In the Shadow of the Banyan as my favorite book club selection when there were so many other great books which deserved notice: The Life and Times of the Thunderbolt Kid and The Secrets of Mary Bowser were two which I thought led to especially fun and insightful discussions, also. Ultimately In the Shadow of the Banyan won out because the book was so beautifully rendered.
The length on time since I finished reading the book also undoubtedly impacts its selection. I just finished listening to The Life We Bury this week so it is fresh in my mind. It is a thrilling murder mystery but would it be on the list if I read it February? No wonder movies released in December often win Academy Awards.
Quite often I find myself liking books which others have liked in the past. It makes sense that an award book has literary merit and should be a favorite of mine, too, even if I read it years after it won the award. This is the case with The Yearling, which won the Pulitzer Prize in 1939 and The Brief Wondrous Life of Oscar Wao in 2008. My positive feelings about award winners led me to want to read this year's winner, The Sympathizer, which, by the way, is excellent. But I listened to the audiobook and my friends, who read the print edition, did not find it as pleasant. If you are ever casting about trying to decide what to read next I recommend you give one of the Pulitzer Prize winners a try. I haven't been disappointed yet reading from that list.
Only four or five young adult books (YA) have percolated to the top of my thoughts this year and that is surprising considering how many I have read. The Passion of Dolssa is my absolute favorite, hands down. It is the story of a thirteenth century mystic living in Southern France. Instead of being revered she is hunted in one of the earliest Catholic Inquisitions. Good fiction should not only entertain but it should also educate and this book does both in spades. Another YA historical novel, My Lady Jane, takes an actual historical figure, Lady Jane Grey who was queen for nine days, and reworks the story into a farcical and funny retelling with a happy ending. I laughed my way through that book from start to finish. Was it well-written and worthy of literary acclaim? I don't know. I was too busy laughing to notice. The Raven King is the fourth book in the Raven Cycle series by Maggie Stiefvater. It is a complex series with lots of characters and twisted plots but this last book was a satisfying and sometimes thrilling conclusion to the whole series where Stiefvater showed her skills at weaving lots of plot lines together in the end.
Nonfiction books usually change my life more than fiction ones and this year was no exception to this rule. The Art of X-Ray Reading is one of those very readable books which helped me become a better reader and writer. I continue to utilize skills I learned from that book in my blog writing and book analysis for my reviews. Just Mercy and March, Book Three both have to do with civil rights and have caused me to stop and think and rethink what I know about this topic. I highly recommend both of them. And though it is a children's illustrated book, Jazz Day is about a remarkable event which occurred in the late 1950s when a photographer got most of the famous jazz musicians of the day together for a photograph. I'd never heard of or seen the photograph before reading this book.
Lastly, the book which impacted me the most in 2016 was Beryl Markham's West With the Night. I had tried reading it back in the early 1990s but apparently wasn't ready for it then. Markham lived in East Africa (now Kenya) in the early part of the twentieth century. Her stories about her life in Africa are so vivid I was transported in my mind to another time and place. That book began for me what I've called my Africa Phase. I read book after book about Africa and that time period after consuming West With the Night. It is truly a remarkable book, not to be missed.
So there is my  favorites of 2016 reading list explained in a nutshell. I am sure if I created this list last week or next week it would contain a different set of books but one has to stop somewhere and put type to page with a period at the end. 2016 was a good year in reading. I wonder what 2017 will hold?

What were your favorite books of 2016?

Top Ten Tuesday is hosted at The Broke and Bookish.

Posted by Anne@HeadFullofBooks at 11:03 AM