My Favorite Book Club Selections from 2021 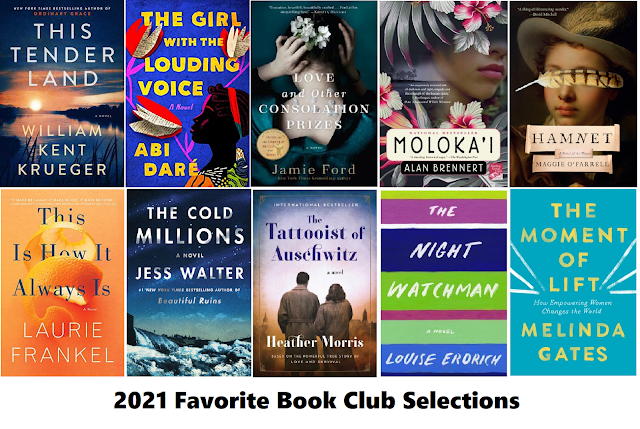 After the fiasco that was last year, we had the fiasco that was this year. Fortunately both of my reading groups reorganized and got ourselves dusted off ready for some great book discussions. Of the 23 books I read (or reread) for book club this past year, the titles I list below were my favorites.  I did get input from other group members and I factored it into my rankings. Titles are hyperlinked, if you would like to read more about the books and our discussions.
1. This Tender Land by William Kent Krueger (Atria Books, 2019)
The author said he wanted to write an all-American tale. So he set it during The Great Depression along the great Mississippi River, taking some inspiration from The Adventures of Huckleberry Finn, The Grapes of Wrath, and a lot from Homer's Odyssey. It was a fun book to read and to discuss.  It was the RHS Gals #1 choice of the year. (RHS Gals #1, read for July meeting.)
2. The Girl with the Louding Voice by Abi Daré (Dutton, 2020)
The second choice of the RHS Gals club was an unforgettable, inspiring story of a teenage girl growing up in a rural Nigerian village who longs to get an education so that she can find her “louding voice” and speak up for herself. It is a simultaneously heartbreaking and triumphant tale about the power of fighting for your dreams. Much of our discussion centered around the need around the world for education for girls. (RHS Gals #2, read for April meeting.)
3. Love and Other Consolation Prizes by Jamie Ford
Ford is a favorite author of the SOTH Ladies Book Club probably because he sets his stories in Seattle so we can picture the landmarks he references. This story was built upon a little news items he happened on doing research: a boy was raffled off at the 1909 Seattle World's fair. Can you imagine? Around this actual tidbit of information Ford constructed a plausible and enlightening story. (SOTH Ladies #1, read in June.)
4. Moloka'i by Alan Brennert
This is quite possibly the perfect book club selection. Why? Our discussion covered many topics: colonialism; the Hawaiian monarchy; Hawaiian culture--which included religion, food, and words; the evolution of leprosy treatment; cultural and familial reactions to leprosy; Moloka'i; historical events like the invention of airplanes and WWII; childbirth and adoption; missionaries and the Catholic Church; friendship and family. This list is not exhaustive. I'm just giving you a smattering of topics covered in MOLOKA'I. We had a fabulous discussion. (RHS Gals #3, read for February meeting)
5. Hamnet by Maggie O'Farrell
This was my favorite book of 2021. The story is about the family of Shakespeare, specifically around the death of his son, Hamnet. I loved the way it exuded a dreamlike quality. We had a good discussion but others didn't love it as much as I did, maybe because I listened to the audiobook and they didn't. (RHS Gals, read for March meeting)
6. This Is How It Always Is by Laurie Frankel
A family deals with the a secret. Their daughter was born a son. How the family deals with the secret ends up nearly destroying them all. It is a very current and important topic. I read this book for book club in 2017 and then again in 2021 for my other club. I liked it better the second time around. We had a great discussion. (SOTH Ladies #2, September selection)
7. The Cold Millions by Jess Walter
In The Cold Millions readers learn about some the labor riots, free-speech events, and union organizing that happened in and around Spokane on the eastern side of Washington State in the early 1900s and about the powerful mining magnates who desperately fought to keep unions out. The fictional story felt very prescient as powerful people continue to fight to retain power and money on the backs of the little people even today. Everyone in the club enjoyed this book and the discussion reflected it. (RHS Gals, August selection)
8. The Tattooist of Auschwitz by Heather Morris
This book really plucked at our heartstrings and was the second favorite selection for the SOTH Ladies in 2021. It based on the lives of real people imprisoned in Auschwitz concentration camp during WWII. (SOTH Ladies #2, July selection)
9. The Night Watchman by Louise Erdrich
Another story based on a real person. That person is the author's grandfather, who traveled to Washington, DC in the 1950s to speak on a bill that Congress was considering to eliminate several Native American tribes. The story, or stories, is pretty complicated and there are lots of characters. Everyone appreciated the book but found reading it very challenging. (RHS Gals, September choice)
10. The Moment of Lift by Melinda Gates
The SOTH Ladies are a church group made up of old-ish ladies like myself. This book, written by the Melinda Gates, now the ex-wife of Bill Gates, is about her efforts/her charity's efforts to empower women throughout the world. This book spoke to us in our hearts because we all believe that the world would be a better place if women were given more rights. Instead of being one of those books that leaves the reader merely depressed at the state of world for so many people, The Moment of Lift leaves the reader with an empowered feeling that though there is much to do, there is much that is being done and good actions likely to bring about permanent change. The book isn't especially well written and was a bit repetitive, but it gave us tons to discuss, which is the point of book clubs. Right? (SOTH Ladies, October selection)

If you are in a book club, what were some of your favorite selections last year?

If you are not in a book club, do you have any suggested titles of books you think would make for good discussions?

Looking for even more suggestions?

Click the links to check my past book club favorites by year: 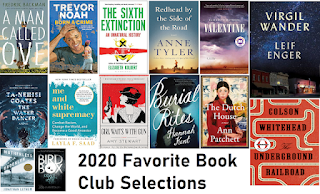 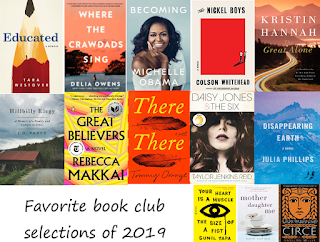 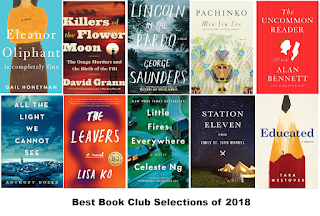 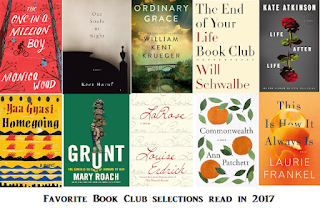 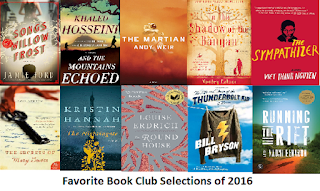 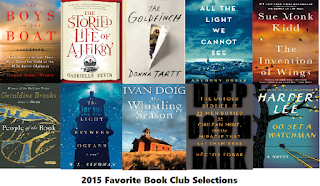 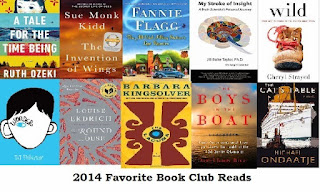