My favorite book club selctions for the past decade, one per year 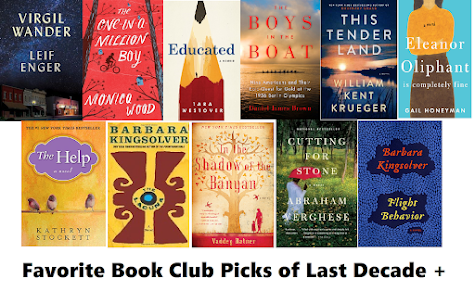 Favorite book club picks of the past decade. One per year.

I was chatting with a blogging friend the other day and in the course of the conversation she mentioned we should look back on our past book club selections to identify favorites (Thanks Deb@Readerbuzz). With a quick look back at my past twelve yearly posts of book club favorites, these eleven titles surfaced as the favorites of the favorites, one for each year.

2021 This Tender Land by William Kent Krueger The author said he wanted to write an all-American tale. So he set it during The Great Depression along the great Mississippi River, taking some inspiration from The Adventures of Huckleberry Finn, The Grapes of Wrath, and a lot from Homer's Odyssey. It was a fun book to read and to discuss.  (See the full list for 2021 favorites here.)

2020  Virgil Wander by Leif Enger---this book was a delight to read and a delight to discuss. Part of the discussion focused on the wordsmithery of Enger. Read my review, please, you will see what I mean as I included a few quotes in it. (See full list of 2020 favorites.)

2019 Educated by Tara Westover---This is on my list for the second year in a row. If you haven't read this book yet, what are you waiting for? An excellent discussion book on the topic of family dysfunction, education, abuse, and making one's own way. (See full list of 2019 favorites here.)

2018 Eleanor Oliphant is Completely Fine by Gail Honeyman--- At first I thought this was going to be an unfunny version of the Rosie Project. I was wrong. Eleanor Oliphant has lots of problems but she also has a friend who helps her to find her way and to grow to love and accept herself. (See full list of 2018 favorites here.)

2017 The One-in-a-Million Boy by Monica Wood. This was not only my favorite book club selection of the year, but it was also my favorite book of 2017. The story about a boy, his estranged parents, a 104-year-old-woman, and a cast of quirky characters is both heart-warming and heart-breaking at the same time. Everyone in my club liked the book, too, and it generated a fun discussion. (See full 2017 list here.)

2016 In the Shadow of the Banyan by Vaddey Ratner---An unlikely winner considering the subject matter: the reign of the Khymer Rouge in Cambodia and the devastation on the lives of the people involved. But this book was exquisitely written, simply gorgeous. We had a fabulous discussion about the book and about this despicable event in history. (See 2016 favorites here.)

2015 The Boys in the Boat by Daniel James Brown---this book was featured as the All Pierce County Reads book of 2015. It is about the rowing team from the University of Washington and how they won the 1936 Olympics in Berlin. It is much more than a sports book, however, it also a book about the lives of the rowers and their coaches, the Great Depression, and Hitler and the beginnings of the Nazi movement.  (2015 book club favorites here.)

2014 The Lacuna by Barbara Kingsolver---Even though this book is a tome, weighing in at over 500 pages, everyone in the book club really liked it. And we had so much to talk about: the labor movement in the world, McCarthyism, Frida Kahlo and Diego Rivera, WWII, The Depression, politics, Leon Trotsky, Roosevelt, friendship, and homosexuality. This book tops the list because of how much I learned about the time period and because of the spectacular writing. (2014 was a good year for book club choices.)

2013 Flight Behavior by Barbara Kingsolver---I always learn something when I read Kingsolver. The theme of this book is climate change and personal politics that surround the issue. Very insightful. (My favs of 2013 book clubs)

2011 Cutting for Stone by Abraham Verghese---set in Ethiopia starting in the 1960s this book had me from page one. It looks daunting at over 500 pages but it was pure pleasure to both read and discuss.  We discussed this book in January and I knew it would be my favorite book of the year, and I was right.  (My favorite book club selections of 2011.)

2010 The Help by Kathryn Stockett---set in the South in the early to mid 1960s.  Black maids are raising white children who grow up and become racist like their parents. This superbly-written book was almost life-altering to read...it really made us think!  It generated excellent discussions in both groups. Even if you aren't in a book club, read this book. (My first 'Best Book Club' selections list.)

Posted by Anne@HeadFullofBooks at 7:36 PM