Review and quotes: THIS TENDER LAND 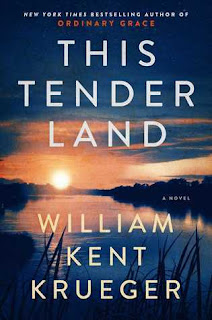 (Prologue) In the beginning, after he labored over the heavens and the earth, the light and the dark, the land and sea and all living things that dwell therein, after he created man and woman and before he rested, I believe God gave us one final gift. Lest we forget the divine source of all that beauty, he gave us stories.

I'd lost my mother and my father. I'd been beaten, degraded, thrown into isolation, but until that moment, I'd never lost hope that someday things would be better.

Summary: Part Homer's Odyssey, part Twain's Adventures of Huckleberry Finn, and part Steinbeck's Grapes of Wrath, the narrator of This Tender Land is Odie who, like his namesake Odysseus (Latin for Ulysses), is a story-teller and a musician. He tells the tale of four vagabonds in 1932 in the midst of the Great Depression -- himself; his older brother Albert; Mose, a teenage Sioux student who is mute; and Emmy, a young girl, recently orphaned -- who set off down the Mississippi River in a canoe in an attempt to escape from the horrors of the Lincoln Indian Boarding School. They are pursued by the director of the school and his wife. Along the way they are briefly captured and detained by an unpredictable farmer who seems intent on enslaving them. After escaping their captors the four children fall in with Sister Eve and her tent revival troop escaping again in the nick of time. Next they end up spending time near an encampment of displaced families known as a Hooverville. The children's goal is to find a home. Will they find it on Ithaca Street in St. Louis with Aunt Julia?

Review: A friend, who is a retired English teacher, recommended this book to me in a note saying, "This was my favorite book read in 2020." Not being a literature major myself, I missed a lot of the literary references until they clunked me on the head near the end of the book. Now I wish I could reread it with an eye for all of them. The author wanted to write an American saga similar to Huck Finn but accomplished much more by tucking in so much information about what life was like in the despicable Indian Boarding Schools, the desperation of so many people living in Hoovervilles during the Depression, life along the Mississippi River and its tributaries, and even the old-timey tent revivals. And the whole time, like Ulysses (Odysseus) of old, looking for a way home. It really is a masterpiece and I understand why my friend enjoyed it so much. I'm sure my book club will find a lot to discuss as we digest This Tender Land together next week during out meeting.

Odie was a storyteller. In the epilogue he tells us about the importance of this story, which I think is a perfect way to close a book:

(Epilogue) "As I told you in the beginning, this is all ancient history. There are not many left who remember these things. But I believe if you tell a story, it's like sending out a nightingale into the air with hopes that is song will never be forgotten...In every good tale there is a seed of truth, and from that seed a lovely story grows. Some of what I've told you is true and some...well, let's just call it the bloom on the rosebush."

In an interview with the author, William Ken Krueger said he set out to write a companion book to another of his stand-alone novels, Ordinary Grace. In that book, as in this one, the main character is a young boy who has a wounded spirit that needs healing. Though the process of reading stories, Krueger tells us, we too can be healed from our wounds as we see the characters surviving and thriving despite their own. This is what I love about books. The title, This Tender Land, refers to the sacredness of nature and our connection to it. As Odie and his little band of vagabonds explore the river their eyes are open to its sacredness. If this doesn't make you want to read the story, I don't know what will.