Title: The Anthropocene Reviewed: Essays on a Human-Centered Planet by John Green

Book Beginnings quote from the INTRODUCTION: 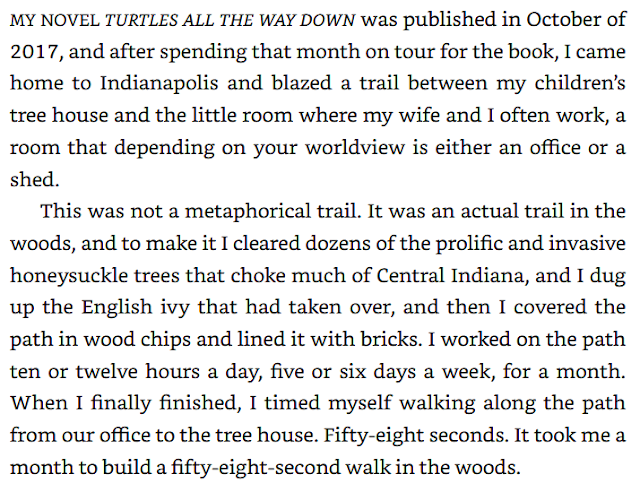 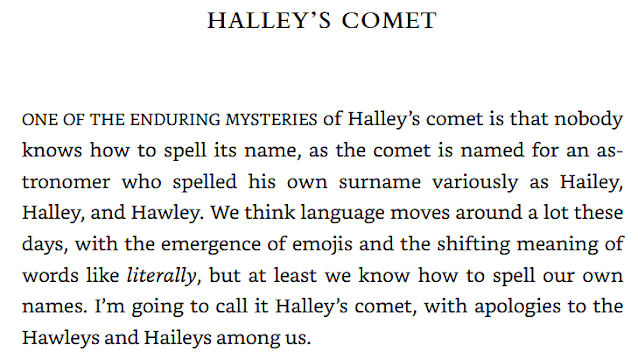 Summary: The Anthropocene is the current geological age, viewed as the period during which human activity has been the dominant influence on climate and the environment. In this clever books of essays, YA novelist John Green reviews aspects of our culture, giving each a rating like we do in the book blogging world, 1-5 stars. In the introduction Green explains how he decided to review and give ratings to everything and anything in culture, after he and his brother spent time together on a road trip. Along the way they tried to one-up each other by finding the most absurd Yelp reviews about sites they were passing. Like the review they found by someone who gave Badlands National Park a bad review, "Not enough mountains." There are forty short essays, each acting as a "review" of some aspect of the Anthropocene.

A quick look through the titles of the essays will make you wonder how Green makes connections one to the next -- "You'll Never Walk Alone;" Humanity's Temporal Range; Lascaux Cave Paintings; Scratch and Sniff Stickers; Canada Geese; Penguins of Madagascar; the QWERTY keyboard; Diet Dr. Pepper; and The World's Biggest Ball of Paint -- to name a few. Most of the essays are a mixture of humorous poignancy. Many of the essays he wrote after the COVID-19 plague altered our world so dramatically, in fact one of the essays is titled "Plague" and naturally it got only 1 star. It is clear that Green is afraid for our world and what is happening with diseases, climate changes, and mankind's inability to do much of anything to fix our problems. But he also conveys through his essays that there is a lot to love in the world and a lot worth saving. He writes, "To fall in love with the world isn't to ignore or overlook suffering both human and otherwise .... We all know how loving ends. But I want to fall in love anyway, to let it crack me open." Oh boy, does he let us see into his mind and heart through these essays.

Review: On a recent trip my husband, daughter, and I caravaned to California in two cars, shifting drivers on intervals so that no one person would get too fatigued or have to spend all the time in the hot car (bad air-conditioning.) We had four audiobooks cued up: one for my husband and I to listen to when we were together, a different book for when I was alone, our daughter had a separate audiobook she listened to alone, and The Anthropocene Reviewed was the audiobook my daughter and I listened to when we were together. One glitch in our plan was discovered when my daughter and husband ended up in a vehicle together and they realized they didn't have a separate book for their duo. They continued listening to the Anthropocene Reviewed with my blessing, knowing I would be able to go back on my own to catch up. (As it turned out for our return trip which was minus our daughter, my husband and I decided to start over so each of us had to listen to several essays twice to allow the other person to hear them once.) John Green was the narrator of his essays which was pretty perfect since it just seems correct to hear the essays which are written from his point-of-view in his own voice. We laughed. We cried. We paused the audio and discussed. We pondered the information we were learning and talked about it days afterwards.

I want to encourage you to consider reading this book even if you don't think you like to read essays. The essays are relatively short and as you can see from the two examples I've provided, Green's writing is very accessible. It is not a YA collection, though I'm sure that many teens will find the book enjoyable, it is geared for adult readers. Don and I finished listening to The Anthropocene Reviewed before we returned home from our long car trip. I've thought about many of these essays every day since then. I'd like to get myself a copy of the print version so I can reread the essays and enjoy them for the second, or third time whenever the mood hits me.

And in the style of John Green's reviews -- I give The Anthropocene Reviewed 5 stars.

Posted by Anne@HeadFullofBooks at 4:46 PM