Review and quotes: WE ARE NOT FREE 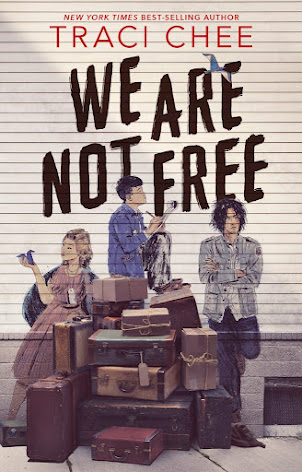 Title: We Are Not Free by Traci Chee 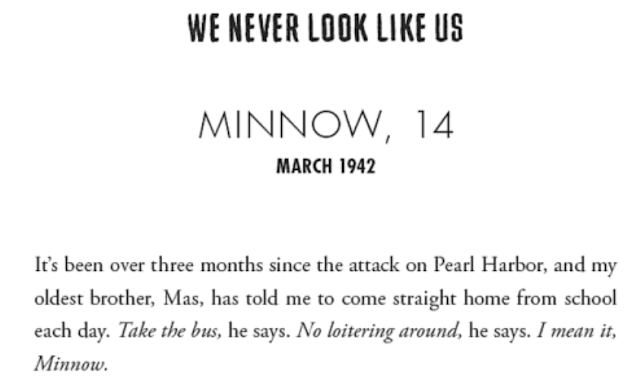 Summary: 14 teenagers and friends who live with their families in Japantown in San Francisco in 1942 tell their stories of what life was like for them when the Exclusion Order comes down from the government to place all people of Japanese descent living on the West Coast into Internment Camps for the duration of the war. We follow these teens as they lose everything their family owned, were transported to the camps, loss of their freedom, and then being asked to sign a loyalty pledge to the country that had just imprisoned them.

Review: I put this YA novel onto my reading list because it won a Printz Honor this year for being one of the best YA books of the year. I've read many books about Japanese Internment but none from the point-of-view exclusively of teenagers. I was struck by how normal these fourteen teens really were. They wanted to do and be the same things that all teens want -- to have friends; to be popular; to look good; to fall in love; to fell safe; to not be bothered by younger siblings; to have a sense of community; and to belong.

In the first part of the book the teens all live in the same area of Japantown, a section of San Francisco. Some are harassed by whites and told to 'go home' or are accused of being traitors. Their Chinese-American neighbors put up signs saying 'We are Chinese' so that they, too, won't be harassed. Then as the evacuation order comes down families are forced to sell everything on very short notice before they were taken to detention/processing places nearby like Camp Harmony in my town which was really the Western Washington Fairgrounds. Families lived in horse stalls and pig pens as their paperwork was processed before they were moved to newly erected "camps" where the families were imprisoned and under guard. Yet life for these teens continued. They still got crushes on each other, and looked forward to social events like dances where they would fill up their dance cards before the day of the dance. They formed softball and baseball leagues and even played games against schools from nearby communities. Then they were all asked to fill out the government pledge claiming their loyalty to America and disavowing fealty to Emperor. They had to answer yes-yes or no-no. They couldn't split their answer. This angered the Japanese community greatly. What a horrible bind they were in. Those who answered no-no were sent to more restrictive camps like Manzanar. Some of those who answered yes-yes were allowed to move out and locate somewhere on the East Coast or Midwest. Eventually the war ended and families were free to go home. But where was home and what would they have when they got there?

Traci Chee's relatives had to live through this trauma and her author's notes at the end of the book are very enlightening and moving. I learned so much and am grateful to have an additional point-of-view to consider as I think about history. For example Chee explains how the terminology that was used makes 'internment' not sound like what it was -- 'incarceration'. And the terms 'forced removal' should be used instead of 'evacuation', which makes the action seem like something that was helpful and good. Words matter.

In the words of Redress hero Aiko Herzig-Yoshinaga, “words can lie or clarify.”  When we use language that distorts the past, we lose our ability to recognize patterns of repeating history. But language that imparts truth and understanding can help us avoid repeating those same mistakes today. (Densho).

I highly recommend this book. I consumed it in the audio format which was so well done using a whole cast of different voice actors to represent all fourteen of the main characters. But I missed our on the illustrations and other visuals. So maybe use both print and audio! And, as a side note, don't you just love the cover? I do.

Posted by Anne@HeadFullofBooks at 10:59 AM