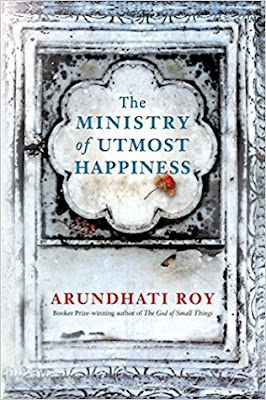 The Ministry of Utmost Happiness is Arundhati Roy's second novel, published twenty years apart. The God of Small Things, her first, is one of those novels I think of quite often, not because I can recall much about the plot but because of its beautiful prose. A year or so after reading it I was asked to share my favorite novels with a group of high school students. I selected The God of Small Things, among other books, and read aloud a passage thinking it was especially well-written. The students sat their with their mouths set into question marks, asking "Why would you think we'd be interested in a book because of that passage?" I learned my lesson, at least as far as high-schoolers were concerned, to keep my love of the prose to myself. Stick to the plot, Anne, stick to the plot.

First, I should say that listening to the audiobook of The Ministry of Utmost Happiness is probably the perfect way to consume the book. Roy narrates her own novel in a beautiful, melodious Indian accent. The reviewer for Publisher's Weekly said her narration was too slow, too concerned with pronouncing the various words in Hindi, Punjabi, Kashmiri or whatever language she was reading, to make her narration enjoyable for the listener. I solved that problem (if it was one) by bumping up the narration speed on my phone to 1.25. I thought the narration was perfect. With Roy's words and tone the listener can hear her love and passion for India and her fear of what is happening in the New India of recent years. When the story became complicated or when I lost the thread, I would just listen to the narration and absorb it. It made me feel like I had actually traveled to India myself. I experienced every smell, reveled in the colors and the sounds, tasted every morsel of food. I may not have understood everything that was happening in the plot but I WAS in India!

The story runs along two specific branches which find themselves attached to the same tree later in the book. First there is the story of Anjum, a transgender woman, who ends up living in a graveyard after the death of friend and her own survival from torture during the uprising of Gujaret in 2002. Living in a graveyard when one thinks of themself as dead already makes sense but Anjum doesn't die, she ends up collecting a whole community of other societal misfits and other victims of the New India. I'm sure a literature teacher somewhere is asking her students the symbolism behind why these people all ended up living in a graveyard. And while we are at it, what does Anjum's divided soul tell us about what is happening in India today?

The second story line deals with the repression of independence and the subsequent violence in Kashmir, a northerly state bordered by Pakistan and China. Fighting and unrest has been occurring in this region since partition in 1947 but there have been several bloody and deadly battles over the years, and at other times the unrest is caused by the cruelty, arrests, and torture by the Indian security forces on whomever they choose and for seemingly no provocation. The reviewer for the L.A. Times said that The Ministry of Utmost Happiness was the best protest novel he'd read in years. I would agree. I knew things weren't wonderful in Kashmir, but I had no idea how bad things really are for the citizens of this area. Tilo, a beautiful yet haunted architect, and the three men who love her all carry the story forward, telling their parts in separate, yet related chapters. Once again I imagine some teacher probing the symbolism here. Why so many lovers? How does this relate to India?

Everything is a muddle and in the middle of the muddle there are babies and children. Their stories, too, exemplify the New India and where the two branches merge. "Happily... Roy weaves the stories of Tilo and Anjum together in the novel’s musical and beautifully orchestrated conclusion — an ending that manages to extract hope from the copious tragedies these people have witnessed, a glimpse of the future in lives so burdened by the past" (NYT).

The prose, let's not forget the beautiful and often silly prose. 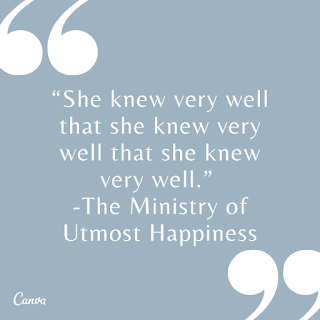 I do want to warn you, the book is not an easy read. Roy weaves the story together but often I found myself wondering what was happening and when the action was taking place. She often tells us some fact and chapters later goes back and fills in the details. This circular-type of writing is very off-putting for many readers. When I found myself confused I just had to remind myself that I would eventually figure things out and then I'd sit back and enjoy my trip to India, relishing all the sights and sounds.

To understand the book better it helps to do a little research on Arundhati Roy. Her first book, The God of Small Things, seemed to come out of no where and when it won the Booker Prize in 1997 everyone talked about how pretty Roy was and how innocent.

Roy appeared to want no part of any of this. She chopped off her hair after the Booker win, telling The New York Times she didn’t want to be known “as some pretty woman who wrote a book,” and donated her prize money to the Narmada Bachao Andolan, a group protesting the construction of a series of dams that threatened to displace millions of villagers. She turned her attention from fiction to people’s movements all over India—Kashmiris resisting the Indian military’s occupation, tribal communities fighting to protect their ancestral lands. She decried India’s nuclear testing (a source of much national pride at the time) and became an outspoken critic of America’s war in Afghanistan. She was praised for her commitment and derided for her naïveté, and faced charges of obscenity and sedition (later dropped). She was invited to model khakis for Gap (she declined) and to march through the forests of central India with Maoist insurgents (she accepted). And now, after 20 years, she has finally returned to fiction with a new novel, The Ministry of Utmost Happiness (The Atlantic).

All of her passions mentioned in The Atlantic review are included in the book: displaced villagers, Indian occupation of Kashmir, Afghanistan, and Maoist insurgents. Between her first and her second novels Roy was busy writing nonfiction articles and books on these topics but she is a firm believer in the power of fiction to tell us the truth in a format we can understand.

Critics of The Ministry of Utmost Happiness are quick to say that the novel is too full of her causes and not organized in a way that they, literary snobs, would have organized it. One critic even mentioned that she writes without any (or very little) editing, like that is a bad thing. I say, hooray for Roy and her ability to educate and activate her readers.

The Ministry of Utmost Happiness is this month's book club selection and I am in charge of the discussion. These discussion questions seem to get at the heart of the text, so I will use them to guide me. One question really jumped out at me and I hope to really delve into it. Honestly, this question seems to encapsulate the whole point of the book.

15. Discuss the lines of poetry that Tilo writes the end of the book, "How / to / tell / a / shattered / story? / By / slowly / becoming / everybody.  /No. / By slowly becoming everything" (page 442). How do the main characters—Tilo, Musa, Naga, and Anjum—embody the idea of telling a story through the assimilation of its many fragments?

In addition to this being a book club selection, it also qualifies for three other reading challenges. It was a long book, 467 pages, so it qualifies for The Big Book Summer Challenge and it is the eleventh book I've read for the 20-Book Summer challenge. It will also be added to the Audiobook challenge where I've committed to listening to 25 books this year. It is my 21st audiobook of 2021.

Posted by Anne@HeadFullofBooks at 12:24 PM