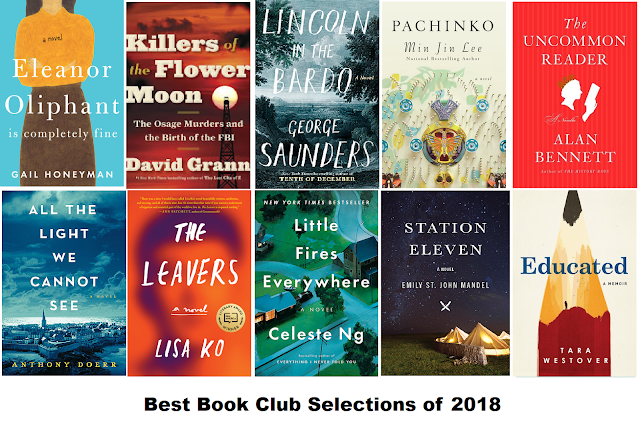 2018 Book Club favorites. I am in two book clubs. For this reason sometimes books will end up on my end-of-the-year list more than once. This year I didn't ask the gals in my clubs, SOTH and RHS, for feedback, therefore this list is all mine. Keep in mind I select my favorites based not only on how much I liked the book but also on how well the book generated a discussion. I also factor in an educational aspect. Did I learn something new by reading the book?  If so, bonus points.

1. Eleanor Oliphant is Completely Fine by Gail Honeyman (2017, Viking Press)--- I had to miss the book club where this book was discussed but I put it in the #1 slot because I loved it so much. At first I thought this was going to be an unfunny version of the Rosie Project. I was wrong. Eleanor Oliphant has lots of problems but she also has a friend who helps her to find her way and to grow to love and accept herself.

2. Killers of the Flower Moon: The Osage Murders and the Birth of the FBI by David Grann (2017, Doubleday)--- What is the saying? Truth is stranger than fiction. That is for sure. David Grann tells us the story of the murders that happen on the Osage Reservations over a series of years in the 1920s and 30s, and how the case is finally broken open by the fledgling FBI. Everything about this story was fascinating and maddening at the same time. There was a lot to discuss.

3. Lincoln in the Bardo by George Saunders (2017, Random House Audio)--- Notice that I am recommending you consume this book in the audio version, as I did. The audiobook, which won the 2018 Audie Award for best audiobook of the year, used an unheard of 166 unique narrators. The listening experience was fantastic. Aside from that, the book gives the reader a lot to think about: life-after-life, the Civil War and slavery, life and customs during the mid-1800s, grief, and contrasting reports of eye-witnesses.

4. Pachinko by Min Jin Lee (2017, Grand Central Publishing)---at 489 pages, this book is probably a bit long for most book clubs, but if you have a bunch of strong readers, consider it. It is a sweeping saga that explores faith, family, and identity. Set in both Korea and Japan.

5. The Uncommon Reader by Alan Bennett (2007, Farrar, Straus, and Giroux)--- this book provided our best discussion of the year, hands down. The uncommon reader is the Queen and, oh boy, did we have fun with this one.

6. All the Light We Cannot See by Anthony Doerr (2014, Scribner)--- I debated whether to put this one on the list again this year since it seems that everyone has read it. I decided to include it because it is such a wonderfully written book. If you are in the small percentage of people who have not read it, make reading it one of your goals for 2019. You won't be sorry.

7. The Leavers by Lisa Ko (2017, Algonquin Books)--- Current issues related to immigration, abandonment, and identity can all be grappled with after reading this book.

8. Little Fires Everywhere by Celeste Ng (2017, Penguin Press)---Theme: Mothering in all its forms. This book improved for me as we discussed it. I love it when that happens.

9. Station Eleven by Emily St. John Mandel (2014, Knopf)--- We read this book three years ago in my RHS book club and I wasn't so sure I liked it. But since that reading I've thought of this book practically every day in some context or another. When my SOTH club picked it up, I decided to re-read it and I'm glad I did. There is so much to talk about with this one: pandemics, what makes societies and communities, the importance of the arts, and so much more.

10. Educated: a memoir by Tara Westover (2018, Random House)----This book is only at the bottom of my list because I forgot that we read it for book club and had to add it in at the last minute. Westover was raised by survivalist, Mormon parents who didn't believe in using doctors or even in going to school. This is a book about her growing up experiences which include serious physical abuse at the hand of her older brother, helping nurse another brother and father as they recovered from serious burns, getting into college after never having gone to school at all. It is written in a very fresh style. It is shocking and enlightening. Lots to discuss and debate.

Honorable Mention:
a. The Lost City of Z: A Tale of Deadly Obsession in the Amazon by David Grann (2009, Doubleday)---Nonfiction works so well in our SOTH book club because it gives us something real to chew on and digest. This book, a re-read for me, is simply fascinating. Our books club discussion, hosted by Jane who is a retired teacher, was so fun. She even brought props and made all her food to "match" the setting of the book.

b. March I, II, III by John Lewis (2013, 2015, 2016, Top Shelf Productions)---Graphic novels are not popular among the ladies of my book clubs, so these three award winning autobiographies of John Lewis, the famous Civil Rights leader and current politician, went over like a lead balloon. We selected them because they were the All Pierce Reads books of the year. The books themselves are so good and not to be missed.

c. Caleb's Crossing by Geraldine Brooks (2011, Viking Press)---Books by Geraline Brooks have proven to be excellent book club choices because she does a lot of research so her settings and her characters seem real. This book, set in Colonial times on an island off of Massachusetts, was no exception. We did have an excellent discussion, even if the book itself wasn't a favorite.

d. Less by Andrew Sean Greer (2017, Hachette Audio)---Another book I will recommend in audio format. Why? Because I was the only one in book club who liked (loved) this book and I was also the only one who listened to it instead of reading the print version. That is why it is below the line rather than with my top ten. It is super funny, but also very poignant. If I were guiding a book discussion on this one I'd start with, "How is the title of the book appropriate?" and "Can someone really run away from their problems." This book won the Pulitzer Prize for Literature in 2018, but don't be afraid of it.

Looking for more suggestions?  Click the links to check out my past lists:

Posted by Anne@HeadFullofBooks at 12:19 PM