Nonfiction Review: The Soul of America: The Battle For Our Better Angels 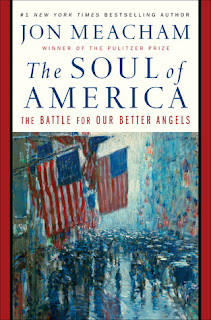 Near the end of Abraham Lincoln's first inaugural address he entreated those American's who wanted to leave the Union over slavery:


“We are not enemies, but friends. We must not be enemies. Though passion may have strained, it must not break our bonds of affection. The mystic chords of memory will swell when again touched, as surely they will be, by the better angels of our nature.”

Unfortunately, just five weeks after that inauguration the first shots of the Civil War were fired on Ft. Sumter by secessionists and we all know where things went from there. Let's just say the "better angels of our nature" were not on full display when men killed countrymen in order for some to maintain their lifestyles which involved owning slaves.

Jon Meacham, historian extraordinaire, is the latest writer to invoke Lincoln's words in the subtitle of his book, The Soul of America: The Battle For Our Better Angels. Concerned, like everyone with troubling events surrounding the Trump presidency and our times, Meacham takes a historian's long point of view, explaining events from our history which were full of political turmoil and deeply divided citizenry. He then describes, through the actions and words of other presidents, mainly four--- Teddy Roosevelt, Franklin Roosevelt, Harry Truman, and Lyndon Johnson---how fear can be replaced with hope and how injustice can be combated through consistent efforts and thoughtful legislation. Meacham guides the reader through the century following the Civil War to the 1960s and the Civil Rights movement by using examples of how, when things seemed their bleakest, the actions of a few brave leaders helped guide the country to find their better angels. “In our finest hours, though, the soul of the country manifests itself in an inclination to open our arms rather than to clench our fists.”

Of course, and we all know this, there is no guarantee that this grand experiment known as the United States of America, will be able to weather every storm it faces. James Bryce worried in The American Commonwealth and warned us about the possibility of a renegade president. "A bold President who knew himself to be supported by a majority in the country, might be tempted to override the law, and deprives the minority of the protection which the law affords it." But Meacham tells us, Truman's comments give us more hope: "The people have often made mistakes, but given time and the facts, they will make the corrections."

Jon Meacham's The Soul of America: The Battle For Our Better Angels came along at just the right moment for me. Every night the news was full of the newest examples of ways that the Trump Administration could be awful to marginalized people: immigrants, Muslims, gays, blacks, Mexicans, etc. Every night my husband would come from work and ask, "What stupid thing did Trump do today?" It almost felt like I went to bed on November 8, 2016 and woke up in another country or world, one I didn't understand or like. Thankfully Meacham comes along and essentially says we need to hang on, things have been bad before but they have always righted themselves in time. But we must be vigilant and we must fight for our better angels. It was a little like having a salve placed on a wound. I have felt more hopeful about America since listening to it.

My husband and I listened to the first half of the audiobook together. It was read partially by the author himself with Fred Sanders reading the bulk of it. Both did an excellent job. Don finished it on his own. The next time we were in the car together I asked if he didn't mind re-listening to the bits I missed again, so Don got to hear the second half of the book again. This allowed us to process the book together after we finished it. My favorite parts included the inspirational quotes from various leaders throughout our history and how Meacham was able to draw a line right down the middle of our history so I could understand how one decision led to certain actions and reactions. It is really very inspiring and stuff. And, just in case you are wondering, Meacham really doesn't spend any time bashing Trump. He leaves that for the reader to do on his/her own time!

I leave you with this wonderful quote from the book:


“Sojourner Truth, Elizabeth Cady Stanton, Frederick Douglass: Their voices, articulating the feelings of innumerable others, ultimately prevailed in the causes of emancipation and of suffrage. It took presidential action to make things official—a Lincoln to free the slaves, a Wilson to support the women’s suffrage amendment, a Lyndon Johnson to finish the fight against Jim Crow—but without the voices from afar, there would have been no chorus of liberty. The lesson: The work of reformers—long, hard, almost unimaginably difficult work—can lead to progress and a broader understanding of who is included in the phrase “We, the People” that opened the Preamble of the Constitution. And that work unfolds still.” -Jon Meacham

The Soul of America: The Battle For Our Better Angels, Jon Meacham, Random House Audio, 2018.