Artemisia Gentileschi was born in Rome in 1593. After her mother's death when Artemisia was twelve, she was given the choice to become a nun or an apprentice to her father, an artist of dubious and mediocre talent, learning first how to grind and mix pigments. She chose art. By the time she was seventeen her talent had far eclipsed her father's talents and he was using her to complete his works and commissions. At some point, her father hired another artist to help teach Artemisia about perspective. That man, a famous artist himself, raped Artemisia. Being a woman the 1600s in Rome meant you had no rights to bring charges against a man, so Artemisia's father had to bring the charges for the loss of his wages, since she was so traumatized and could no longer paint. The trial lasted for days and her perpetrator brought many false witnesses before the judge in an effort to free himself of the charges. One had a document said to have been written by Artemsia, but she was illiterate and didn't know how to write. Another claim was made by a man that she was his whore, but the man was dead so couldn't be cross-examined. Eventually,  after her hands were broken as a test of her innocence, she was declared innocent and her perpetrator was banished from Rome. Transcripts of the trial, all 300+ pages of them, still exist today.

Unfortunately, the rape and the trial are what Artemisia Gentileischi is more famous for than her art, though many think she one of the most talented artists to live in the generation after Caravaggio. She painted Biblical scenes of Susanna and Judith which displayed much more passion and drama than those by her male counterparts. And she also is well known for her adeptness of painting the female figure, whether nude or fully clothed.

After the trial, Artemisia was married to a painter in Florence, so she could achieve some geographical distance from those people who would hold her rape against her, not wanting to be tainted by owning anything created by her. Several years after her move she was admitted to the Accademia di Arte del Disegno in Florence, the first woman to ever be a member. She died between 1654 and 1656. Over fifty of her paintings still exist today. She had one daughter, Prudentia, whom she trained as an artist, also. 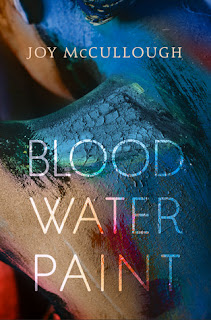 This past week I finished a fiction book about the young Artemisia, the rape, and the trial. The book is called Blood Water Paint by Joy McCullough. It is written partially in verse and partially in prose. A portion of the text are imaginary conversations Artemisia has with her subjects: Susanna and Judith. Both were strong women who stood up to men or did what men could not do. She gained strength and perspective from these women as she stood up for herself in a court of law. This is Joy McCullough's first published book and Blood Water Paint has been named as a finalist for the Morris Award for debut authors. My absolute favorite part of the book is the way that McCullough incorporates artistic terms and practices into her descriptions. For example, when the judge peers down at her, she attempts to view the judge at a "perspective to do him justice". When he renders his verdict very quickly at the end of the trial, "I'd hoped/the court would/take the time/to study every nuance,/every brushstroke."

Unfortunately for me, I chose to start this book in the audiobook format. As you know, I love to listen to books and usually love audiobooks, but this is not a good choice for the audio format because I had no idea what was happening and I didn't even know about the poetry. I was just confused. Who was she talking to? Susanna and Judith? Aren't they Biblical characters? How can she be talking to them? Why is the dialogue so clipped, almost dreamlike? When I finally went to the library and found the print version, my questions were answered. I ended up really liking the story and the way it was written. Artemisia was a remarkable woman who reached back to other remarkable women for strength to survive the horrors of her circumstances.

Back in 2004, I read another book about Artemisia Gentileschi. It was called The Passion of Artemisia by Susan Vreeland. This book is historical fiction at its best recounting not only the circumstances of her early life and the rape trial, but also the joys and trials she had afterwards as a talented and professional woman. Artemisia did not live an easy life. Here is what the book blurb says about the book:


From extraordinary highs - patronage by the Medicis, friendship with Galileo and, most importantly of all, beautiful and outstandingly original paintings - to rape by her father's colleague, torture by the Inquisition, life-long struggles for acceptance by the artistic Establishment, and betrayal by the men she loved, Artemisia was a bold and brilliant woman who lived as she wanted, and paid a high price.

I loved the book. In fact I recall being completely swept up by the story, doing extra research on the artist and looking at photos of her surviving works. When I became a high school librarian the following year, I promptly purchased a copy of it for my library. Unfortunately and apparently, it wasn't a good purchase. I could never talk any student in to checking it out. I finally begged one of the art teachers to read it and she checked it out only to let it live on the floor of her office for six months until I was able to rescue it. Sigh.

If you are curious about Artemisia Gentileschi I can recommend both books without hesitation, but I guarantee you will learn more about her as an artist from this book by Vreeland, and it is less confusing. I sincerely do not recall if I read the print version or listened to the audio version of the book, but if you can get your hands on either, I highly recommend it.

Posted by Anne@HeadFullofBooks at 2:37 PM