Review and quotes: NOTHING TO SEE HERE 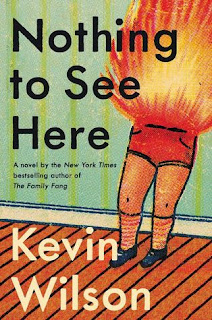 Title: Nothing to See Here by Kevin Wilson

In the late spring of 1995, just a few weeks after I turned twenty-eight, I got a letter from my friend Madison Roberts.

I heard Carl shout, and I turned to see Roland now on fire, though not as bright as his sister. Carl simply kicked him into the pool, where he fell like a rock, extinguished.

Summary: Lillian and Madison became good friends when they attended boarding school together. But when Lillian had to leave school unexpectedly their friendship slipped into a routine of a few letters each year, staying in touch but just barely. So it was surprising when ten years later Lillian received a letter from Madison asking for her help. Madison's twin stepkids are moving in with her family and she wants Lillian to be their caretaker. Caretaker not nanny, why? Well, they need to be protected from themselves since they both spontaneously combust into flames when they get angry or stressed.

Review: I like odd and quirky books and I decided to read Nothing to See Here because this book sounded like it had those qualities in spades. Kids who spontaneously combust? Friends so unequal that one is willing to use the other without thought? I've not read Kevin Wilson's other books, but apparently he is the master of telling the absurd story but making it believable. "He takes the most ridiculous storylines and grounds them in reality with an ample dose of matter-of-factness and sentimentality" (Chicago Review of Books).

As I reflect on the book it seems incredulous that anyone would like it, it is just so absurd. But just like the above mentioned reviewer states, the book is also realistic and sentimental. In fact, as I neared the end of the book I realized I was hooked. The ending was tremendous and unexpected. All the characters grow and learn to love themselves better. That makes it worth the read.