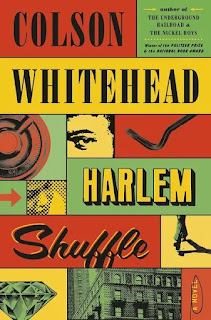 His cousin Freddie brought him on the heist one hot night in early June.

Carney's father was crooked, but that didn't make him so. It simply meant that he knew how things worked in that particular line.

Summary: Ray Carney owns a furniture store in Harlem and makes enough money to support his family but not enough money to move his family out of the rundown apartment dominated by the sounds of the above-ground subway train which runs nearby. Few people know that he descended from a full-time crook, his father.

When Cash is tight, especially with all those installment-plan sofas, so if his cousin Freddie occasionally drops off the odd ring or necklace, Ray doesn’t ask where it comes from. He knows a discreet jeweler downtown who doesn’t ask questions, either. Then Freddie falls in with a crew who plan to rob the Hotel Theresa—the “Waldorf of Harlem”—and volunteers Ray’s services as the fence. The heist doesn’t go as planned; they rarely do. Now Ray has a new clientele, one made up of shady cops, vicious local gangsters, two-bit pornographers, and other assorted Harlem lowlifes. Thus begins the internal tussle between Ray the striver and Ray the crook. ---Publisher

Review: I was predisposed to like Harlem Shuffle because I am such a fan of the author, Colson Whitehead. Heck, the guy had written two Pulitzer Prize winners right before this novel, The Underground Railroad (2016) and The Nickel Boys (2019.) This book, unlike its predecessors, isn't a serious and maddening book about slavery and its tentacles, though the book contains plenty of racism and classism, it is a crime novel with racism nibbling at the corners. I, of course, added Harlem Shuffle to my reading list as soon as it was published but I didn't race out to buy it. Then my interest was reignited when Harlem Shuffle took the number one spot for the most best-of-books recommendations of 2021. (See list here.) It made it onto 22 of these end-of-the-year lists, far outpacing other literary heavy hitters like Hell of a Book, the National Book Award winner, which made it onto eight lists, and The Lincoln Highway, which everyone seems to be talking about, was listed on eleven.

At first I was a little put off by the novel. Somehow I started reading it without realizing that it was a crime novel, which was a little shocking. Ray Carney, the story's protagonist, is outwardly an upstanding man that gets pulled into criminal activity by his bumbling cousin Freddie. Ray, whose father was a crook, views himself as "only slightly bent when it comes to being crooked, in practice and ambition" (34). He keeps finding himself drawn into heists and the fencing of stolen goods with the likes of men named Miami Joe, Pepper, and Chink Montague. Yet, he struggles to maintain his upstanding reputation as a good guy. He is a man divided, one clinging to the self-delusion that he is not really a crook. The end of the story, which left the reader dangling a bit, left the door open for either side to win out: the good guy or the crook.

Though I may not have bought into the plot at first, I was all-in when it came to Whitehead's prose. I found myself chuckling more than once at his turn of phrase, such as the description of the sad Chinese restaurants where “the cookies were stale and the fortunes discouraging." And the feeling that one gets when you realize you've been had: “Humiliation was his currency, but tonight Miss Laura had picked his pocket.” And Whitehead's descriptions of life in Harlem in the 1960s made me wonder if the author was into time travel and had made his way back to that time and place to gather authentic images and aspects of the community.

The title of the NYT review of the Harlem Shuffle should be enough to make you want to read the book, if this review doesn't do it: "Colon Whitehead's Warmhearted Crime Caper of the 1960s in Harlem." Who doesn't want to read a warmhearted crime caper? Give it a try.

Posted by Anne@HeadFullofBooks at 11:21 AM

Email ThisBlogThis!Share to TwitterShare to FacebookShare to Pinterest
Labels: 2022 Reviews