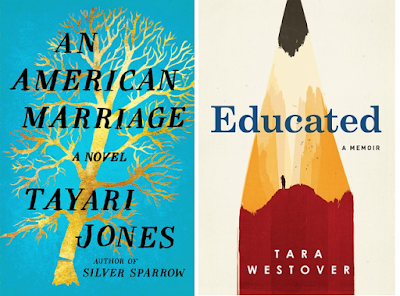 Last year (2018) I pledged to review all the books I read for my two book clubs. Today I complete this pledge by highlighting two of last year's best. But words fail me. Both of these books received some of the highest praise from all quarters making me feel inadequate to the task of saying anything more than "These books are great. You should read them!" So I've decided to do is to tell you just a little bit about each book and then point you to a few reviews worth your time.

Educated: a Memoir by Tara Westover

Summary: Tara was born in September 1986 to survivalist, Morman parents in Idaho. No birth certificate was issued at her birth and her aunt, mother, and grandmother couldn't recall the exact date of her birth. She was the seventh child born to her parents. Her mother was a midwife and a herbalist, with no official training in either. He father fancied himself as a prophet who owned a scrapyard on the side. Tara and her siblings labored in the scrapyard instead of going to school and almost all of them ended up with injuries due to lack of safety procedures. It was amazing that no one died. Supposedly Tara and her younger brothers never set foot in a school, instead opting for home schooling which consisted of reading religiously biased histories, the Book of Mormon, and little else. When Tara decided she wanted to go to college, she had to have a friend help her with math and algebra skills since she had learned none at home. When she did pass the SAT with high enough scores, her first day of school was when she stepped onto a college campus. While in school she felt like an outsider, since she had never experienced many of the things typical teenagers encounter everyday. But going home wasn't really an option either because it meant going back to work in the scrapyard and to the physical and emotional abuse from a brother who bullied everyone, but especially Tara.

Why this book made an excellent book club selection: The best book club books are those that give the members a lot to discuss and EDUCATED was stuffed full of items to chew on: survivalist's mentality; public education vs homeschooling: self-reliance; abuse; religious extremism; family; and loyalty. Everyone in the club was glad we selected this book. I listened to the audiobook read by Julia Whelan. My husband also listened to the book and it gave us a lot to discuss, also.

Reviews of EDUCATED I recommend you check out:

One more thing, if you aren't already convinced, to encourage you to read the book: I've told more people to read this book than any other book I read in 2018 and to a person they are thankful they did read it. One more thing: Tara has a unique and interesting "voice." It is as if by getting educated so late in life she had to develop her own way and her own voice shines through.

An American Marriage by Tayari Jones

Summary: Roy and Celestrial are a happily married, black couple living in Atlanta. They are upwardly mobile and doing all the right things until, by an evil twist of fate, Roy is arrested for a crime he didn't commit and sent to prison for twelve years. The strain of the separation and imprisonment causes the marriage to fall apart, we see through the letters the couple send back and forth to each other over the years. Though the story is about the end of a marriage, it has to be taken in a broader context. The US justice system isn't very just for a large portion of society where the color of a person's skin and the amount of money they have in their bank account have more to do with imprisonment and time spent behind bars. Roy is not given a fair trial and when he finally gets out he finds himself in a new world, one that does not like an ex-con.

Why this book made an excellent book club selection: Again, the book had a plethora of topics and themes worth exploring: racism in the justice system; marriage; culture; blindness to wrongs; what we can do to help. Few people in the group viewed this as a favorite book but all felt it was an important book.

Reviews of AN AMERICAN MARRIAGE you shouldn't miss:

One more thing, if you aren't already convinced: AN AMERICAN MARRIAGE ended up on the most "Best Books of 2018" lists of any book published last year. If all the critics agree, it's time to take a look.

Jump into the conversation on the comments section. Have you read either of these books? What did you think? Would you consider them for your club selection? Your thoughts?

Posted by Anne@HeadFullofBooks at 12:20 PM