Review to follow. Warning this post may contain spoilers!
This is the book I'm highlighting right now--- 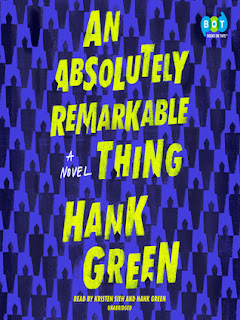 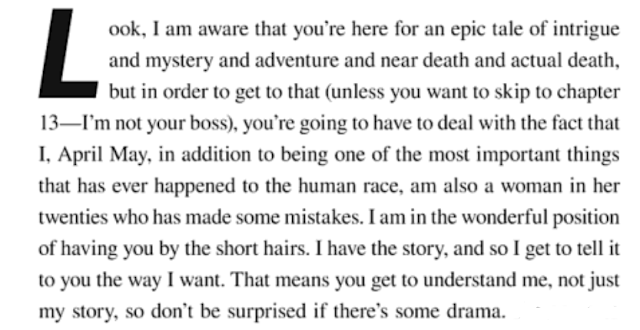 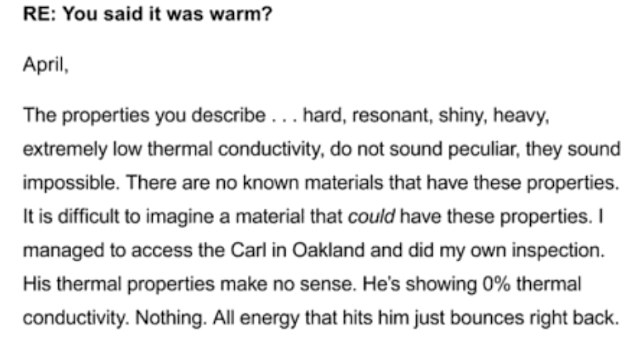 Summary (Again, I warn you about spoilers):


Roaming through New York City at three a.m., twenty-three-year-old April May stumbles across a giant sculpture. Delighted by its appearance and craftsmanship—like a ten-foot-tall Transformer wearing a suit of samurai armor—April and her friend, Andy, make a video with it, which Andy uploads to YouTube. April names the sculpture Carl. The next day, April wakes up to a viral video and a new life. News quickly spreads that there are Carls in dozens of cities around the world—from Beijing to Buenos Aires—and April, as their first documentarian, finds herself at the center of an intense international media spotlight. Seizing the opportunity to make her mark on the world, April now has to deal with the consequences her new particular brand of fame has on her relationships, her safety, and her own identity. And all eyes are on April to figure out not just what the Carls are, but what they want from us. – Book blurb

Review:
This is my kind of book: quirky, even a little snarky at times. It grapples with themes and topics that are very relevant for today. One theme is how social media changes the definition of fame and how some people become radicalized. It shows how people can become dehumanized in other people's eyes. It also shows how we are trained to fight on one side of issues or the other and then communication is generally among the people who agree with you. I kept thinking of politics, though this book wasn't political at all.

April May and Andy become victims of their fame, yet they both strive for a sense of their humanity. Carl (here comes the spoiler) is an alien. Even that topic gets people on one side or the other. April May fights for the Carls and for finding out why they are here. This puts her in the cross-hairs of those who want to vilify them.

I am told by my daughter, who visits Hank's vlog more often than I do, that there is a sequel. I don't think one is necessary, because I don't mind books which end in an open-ended way.

Now here is the funny note. I listened to the audiobook narrated by Kristin Sieh,and the last chapter by Hank Green himself. In my usual fashion I bumped up the speed of the narration to 1.25 which made the book move along at a fair clip. When I read the reviews on Goodread many people commented about how fast and furious the plot progressed. Well, guess what? It unfolded even faster for me. Ha! But I still loved it! In fact, I loved it a lot!

Posted by Anne@HeadFullofBooks at 5:48 PM