TTT: Books I loved that have less than 2000 Goodreads reviews

Top Ten Tuesday: Books I Love That Have Less Than 2000 Goodreads Reviews 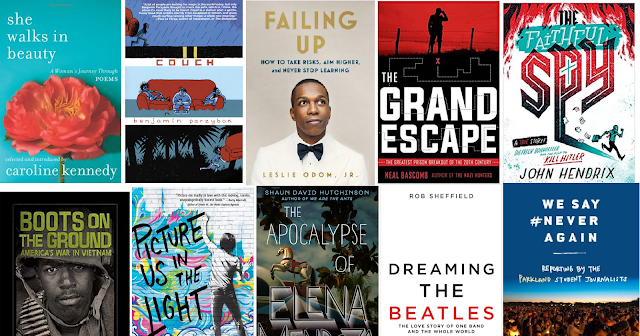 Couch by Benjamin Parzybok---Has 793 ratings/ 158 reviews. I think this book is hilarious, really super funny. But some of the gals in my book club hated it. I admit I like quirky books and this book is very QUIRKY.

Failing Up: How to Take Risks, Aim Higher, and Never Stop Learning by Leslie Odom, Jr.---1480 ratings/ 286 reviews. The Broadway actor/singer, famous for his role in Hamilton: the Musical, talks about how to go for your goals and other inspiring advice.

The Grand Escape: The Greatest Prison Breakout of the 20th Century by Neal Bascomb--- 504 ratings/ 115 reviews. This nonfiction book covers a fascinating account of a prisoner of war breakout during WWI. It was written like one of the best spy novels.

The Faithful Spy: Dietrich Bonhoeffer and the Plot to Kill Hitler by John Hendrix--- 704 ratings/ 226 reviews. A graphic biographic about a German pastor who worked to kill Hitler. I learned a lot. This was the SH Nonfiction Cybils Award winner

Boots On the Ground: America's War in Vietnam by Elizabeth Partridge---335 ratings/ 111 reviews. This was the JH Nonfiction Cybils Award winner this year, a fantastic look at the whole war from a variety of angles.

The Apocalypse of Elena Mendoza by Shaun David Hutchinson---1791 ratings/ 279 reviews. This is a fun, quirky, part Sci-Fi, YA novel that got a lot of critical acclaim last year, but apparently not many teens read it.

Picture Us In the Light by Kelly Loy Gilbert--- 1403 ratings/ 417 reviews. Another YA title that got great professional reviews last year and actually earned an honor for the Stonewall book award.

Dreaming the Beatles: The Love Story of One Band and the Whole World by Rob Sheffield---1254 ratings/ 229 reviews. This is the best Beatles book ever written. How can it have so few reviews?

We Say #NeverAgain: Reporting by the Parkland Students Journalists edited by Melissa Falkowski---152 ratings/ 36 reviews. These are the students who survived a gun shooting at their school and helped start the #Never Again movement for sane gun laws. I am very sad it has been reviewed so few times.

I should say that I am one of those people who rarely reviews books on Goodreads. I will fill out a rating but usually review books on my blog.

Posted by Anne@HeadFullofBooks at 8:22 PM