Review and quotes: LOVE AND OTHER CONSOLATION PRIZES 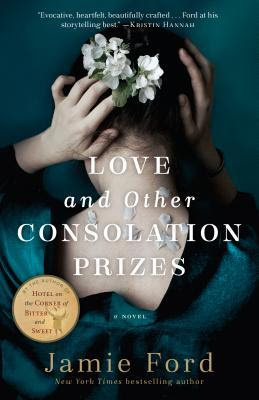 Title: Love and Other Consolation Prizes by Jamie Ford

(Overture-1962) Ernest Young stood outside the gates on opening day of the new world's fair, loitering in the shadow of the future.

"I'm...the prize," Ernest whispered. Those three words hung in the air like that lost helium balloon. I'm to be given away. I belong to one of the ticket holders.

Summary: Twelve-year-old Ernest Young is excited to attend the Alaska-Yukon-Pacific Exposition Fair in Seattle in 1909. As a Chinese immigrant and orphan he doesn't get to do fun things very often. Then he learns that he is going to be given away as a prize. It explains why all the ticket holders are looking at him with curiosity. The winner is the owner of a brothel. Oddly his life improves from that point forward.

Review: Jamie Ford, who grew up in Seattle, was doing some research on the AYP Fair of 1909 when he ran into an article about the little orphan that was to be given away. Not much was known about the boy and his research reached a dead end. But Ford felt that little boy needed to have his story come to life so he created one for him in Ernest. He decided to tell his story by bookending it with the 1962 World's Fair in Seattle. The story goes back and forth between the two time periods as we meet young Ernest and what his life was like near the beginning of his life compared to his life over fifty years later.

The research Ford did also revealed that the early 1900s was a time of extremes in Seattle with a corrupt Mayor and police chief allowing businesses like brothels to flourish. On the other side, suffragettes and other women lobbied and stood up against the corruption and debauchery. In addition, his research revealed that during this time period Chinese children were removed or sold by their parents from their country and brought to the USA by unscrupulous individuals who would work these children almost like slaves. This practice ended after the Mann Act became law in 1910. Ernest, our fictional boy, was brought to the US when he was five or six. His mother was starving so her act may have saved his life. He didn't know if she sold him or not.

As a reader, I am of two minds about Love and Other Consolation Prizes. I liked the story of Ernest and the references to Seattle landmarks and locations. I knew nothing about the AYP Fair and little about the 1962 World's Fair in the city and found details about these two events very interesting. On the other side, I thought the book lacked focus by trying to cram too many social and political events into the story. One book club member remarked it was like Ford tried to fit in all of the research he did, even when mentioning this or that detail didn't advance the story at all. That said, we really did have a fabulous discussion...there was a lot to discuss obviously!

Posted by Anne@HeadFullofBooks at 11:36 PM