Quotes and review: THE FOUR WINDS 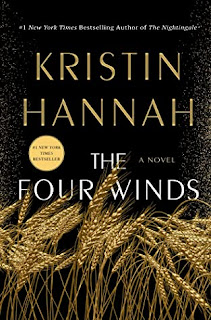 Mr. Martinelli came out of the barn and approached her; "Good morning," he said. "Walk with me."

Summary: The year is 1934. The setting is a small, rural town in the pan-handle of Texas. The Great Depression has been raging for five years. And now the earth itself seems to be raging, too, in great dust storms.

Back in 1920 Elsa Wolcott, age twenty-five, lived a quiet and boring life with her parents who seemed to think Elsa should just accept her lot in life and be happy with her books and her drab looks. In an effort to feel alive she dressed up like a flapper and goes out alone. She ends up having a relationship with a man. When she ends up pregnant, her parents disown her and literally dump her at the home of the man, a farmer's son, and leave her without so much as a backward glance. In the Friday56 quote, Elsa is experiencing her first day on the farm which will end up being her home where her children are born but where she learns to love the land.

Fourteen years later, the dust and the poverty cause Elsa to leave the farm, heading toward California and a new life. Once there, however, 'the land of milk and honey' is anything but plentiful for all the "Okies" entering the state who can't find decent jobs or living accommodations.

Review: I had two conflicting reports rattling around in my head about The Four Winds. Several of my friends were delighted with the book and raved about the story, encouraging me to read it. At the same time a few other friends told me that they didn't like the book or weren't going to read it because of reviews they'd read that were not complimentary. At the beginning it did seem that the latter group was correct. Kristin Hannah's descriptions of rural life during the Dust Bowl weren't nearly as good as that provided by Timothy Egan in his excellent book, The Worst Hard Time. Then the narrative picked up as Elsa and her children make their way to California and get embroiled in the migrant labor movement which happened in the early to mid 1930s in that state. Having never heard anything about these strikes and riots, I found this new information to be interesting and distressing. The ending of The Four Winds was a shocker yet very satisfying.

In an interview Kristin Hannah was asked how she comes up with her stories. She replied that after writing The Nightingale, set in France during WWII, she wanted to write a truly American story. As she was casting about thinking about ideas, she became very interested in The Dust Bowl. As she did more research she learned about the Migrant Labor Strikes and riots in California. Her decision was made...to write a story which included both topics since they were so entwined due to the migrations of thousands of families from the dust bowl states to California.

Big Books Summer Challenge. Weighing in at 454 pages in length, The Four Winds is my second 'big book' of the summer reading season and qualifies for the challenge hosted by Sue over at Book by Book.

Posted by Anne@HeadFullofBooks at 9:39 AM