60°F: That is the temperature outside right now and it is raining. In fact, it has been raining on and off all week.

Twelve: The number of days we were gone on our trip to California to help get our daughter resettled after her hiatus with us, visits with family members -- all my siblings and their spouses, Don's brother and his wife, and my mother -- and a little sightseeing/vacationing in between. We got home on Wednesday evening after logging over 2100 miles on our vehicle.

Two:  Snow plants (Sarcodes sanguinea) spotted on the property next to where we were staying during our time at Lake Tahoe. I learned this plant is quite rare and considered endangered, so it is lucky we didn't try to pick it. As we were doing a little research to figure out the name we came upon this quote from some biologist. “Once seen, this plant is never forgotten; the brilliant red is startling in the filtered sunlight against the dark background of the forest. ” (Richard Spellenberg, 2001). I agree with him wholeheartedly and will never forget this funny, red plant.
8,190 feet: The elevation of our picnic in Lassen Volcanic National Park near Lake Helen. We were awed by the beauty and the oddity of this National Park in Northern California. Lassen is full of beautiful vistas and bubbling, sulfuric mud holes, all ringed by mountain peaks that were part of Mt. Tehama, a volcano that blew up several thousands of years ago. The drive through the park (with a few stops like the one we made for a cold, windy picnic at 8,190 feet) is about thirty miles long and took us about two and half hours to make. It was well worth the time it took to get there.

Three: The number of books and audiobooks completed during the trip -- End of Watch (King); The Anthropocene Reviewed (Green), and Everything Sad Is Untrue (Nayeri). I took four other books with me and made a bit of progress on all of them.

Two: The number of books finished since getting back home. Both happen to be poetry books: Why Storms are Named After People and Bullets Remain Nameless (Winder) and The 100 Best Poems of All Time (edited by Pockell). The last title fits nicely into this week's theme with '100' being so prominent, but I disagree that all one hundred poems are the best of all time. 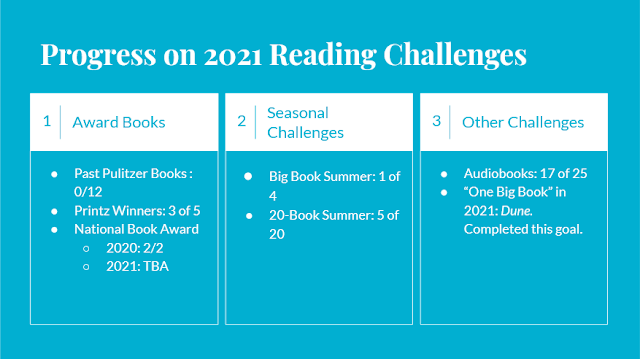 2021 Reading Challenges: I am working on several different challenges right now. Above is a chart of my progress. BTW: The Pulitzer committee announced its winners this past week and The Night Watchman by Louise Erdrich won the Pulitzer Prize for literature. (Thanks Helen for the tip on how to create the slide to display my progress.)

40: Number of different state license plates we checked off the list for our annual summer challenge to find all 50 states. Instead of paper and pencil, this year we used an APP which we easily found. 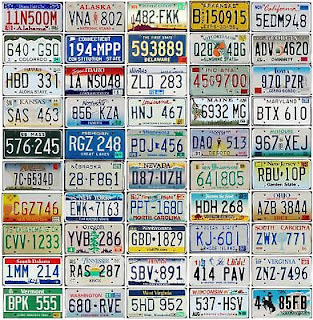 Zero: The number of times we ate out during our stay at the vacation rental in Lake Tahoe. But we did eat at dine-in restaurants twice during the trip, our first inside restaurant meals (although both were outside on the decks) since the COVID-19 lock-downs began over a year ago.

Second-to-last: This past Friday was my second-to-last day of babysitting my grandsons for the 2020-21 school year for my teacher daughter. I love my special time with the boys but confess I have a hard time keeping up with them, especially now that Jamie is crawling and a very busy boy. Next Friday I think we'll go to NW Trek to see the baby animals born this spring and allow Ian to run, run, run!


Eleventh season: We are near completion of watching all 11 seasons of Taskmaster on YouTube, a funny British comedy show where actors/comedians get points for ludicrous tasks they are required to complete, most of the tasks are wildly silly and nearly impossible. Carly got us going on this series and now we are finishing it without her since she is back in California with her kitties. Then -- as with so many other series we've watched in the past year -- we will have to wait for months for the next season to drop.

2Cellos: Not sure what took so long but I just discovered these two guys who are not only fantastic musicians but also tremendously sexy. Here they are playing "Now We Are Free" from the movie Gladiator. (Click here if you can't see the link above.)

Ten+: The number of dogs that Bingley barked at while we watched the first night of the Westminster Kennel Dog Show on TV last night. Surprisingly he did not bark when the best-of-breed Cavalier King Charles Spaniel was on the screen. Ha!

I hope you have a #1 wonderful week!