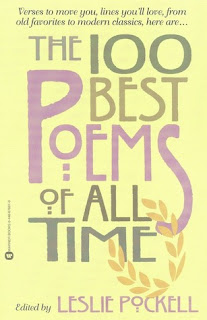 The 100 Best Poems of All Time edited by Leslie Pockell---

Back in 2018 my sister and I met up with our daughters in Ashland, Oregon to attend several plays as part of the Oregon Shakespearean festival. Ashland is a fun, college town with lots of shops to poke around in and restaurants serving unique and tasty foods. It also has several bookstores that I love to poke around in. Aside from the festival's bookstore, my favorite is Bloombury Books on Main Street. As is my usual practice whenever there is an independent bookstore, I make a point of buying something, usually a book or two. During this visit I purchased a small, paperback poetry collection titled The 100 Best Poems of All Time. As a new-ish poetry reader it felt like one of those books I must read. Certainly it was important for me to know which poems are thought to be the world's best.  Apparently I wasn't in a rush to learn about the poems, however, since the volume got stuffed onto a bookshelf when I got home from the trip and didn't see the light of day for several years.

When I rediscovered the volume and starting reading it, I found myself increasingly shocked at the poems selected by editor Pockell as the best poems of all time. First, the book would have been more accurate if it was titled 100 Favorite Poems (Published in English), since very few of the 100 poems were translated poems. There were none by Rumi or Hafez, both famous and wildly popular Persian poets. Only eighteen of the poems, to my way of counting, were not originally written and published in English and that includes the nine that were written either before English was a language or not a dominate language. Certainly 4/5th of the world's best poems weren't composed in English.

Secondly, there seemed to be an attempt to include just one poem from most (but not all) famous poets throughout time. Shakespeare, Sandburg, Eliot, Stevenson, Poe, and Angelou each had only one poem in the collection, so a better book title would have been 100 Poets with One Example of Their Work. Many famous and prolific poets weren't represented at all, but that may have been related more to when the book was published, 2001, so some poets like Mary Oliver and Nikki Giovanni were probably omitted on that score, though it did seem that old, dead white guys predominated the list.

Certainly it was fun to read or reread many of these classic poems but I suspect that a novice poetry reader would find most of the selections tedious or too dense to enjoy. As I read the poems by the English romantic poets---Wordsworth, Lord Byron, Keats, Burns, and Blake---I found myself longing to have the poems read to me, especially the ones that were several pages long. Poetry, afterall, is meant to spoken aloud.

It seems to me, after looking over this review, that I should reread this collection of poems some day when I am not feeling so critical. Ha! 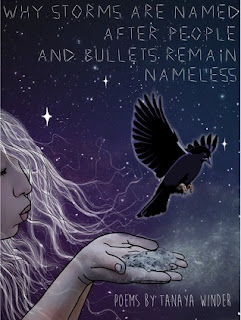 Poet Tanaya Winder is a registered member of the Duckwater Shoshone tribe and grew up on the Southern Ute reservation in Colorado. Winder not only writes poetry but also performs it. Her poems usually are centered around the theme of building community. On this topic, Winder said, "Poetry has the potential to create community for people who are searching for it by providing a space to interact and share experiences on the page."

In her poem, "Every Word You Ever Needed", her desire to use the written word to enhance community is evident. The moonlight is calling me softly: / have the courage to be brave and create, / now's the time. Write / every word you ever needed.

Her poem, "We Were Stolen" really speaks to me as I try to be a better person, a person who doesn't just wrap myself up in my whiteness, but one who tries to appreciate and honor others. Don't just bear witness at rallies or see us in headlines / that declare "missing" then "body found" then "murdered" / and then claim that you'll protect us. / See us when we're alive... / Remember that we are real, we are worthy, and / we deserve to be seen with each beat our heart takes.

Winder is not only a Native author and poet, she is also a woman and many of her poems speak to women specifically. In "For Girls and Women on Fire" she addresses the issue of women losing themselves to men or to cultural norms. But she reminds women that they can achieve greatness and accomplish what we set our minds to. You did it. So don't stop now. / Because you are meant to / keep all the promises you every made to yourself. (Emphasis mine.) And in the poem, "Constellations of Love" these words remind to keep dreaming--- & when I remembered i was magic, it unraveled into beautiful moonlight / exposing new stars to wish upon.

Why Storms Are Names After People and Bullets Remain Nameless is a small volume of poetry, containing only nineteen poems in 40 pages. But the poems are all so powerful and thought-provoking I can wholeheartedly recommend this book to you.

Posted by Anne@HeadFullofBooks at 1:04 PM