Review and quotes: EVERYTHING SAD IS UNTRUE (A TRUE STORY) 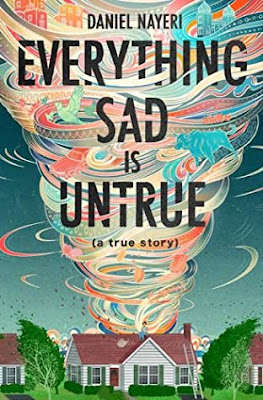 Title: Everything Sad Is Untrue (A True Story) by Daniel Nayeri

All Persians are liars and lying is a sin.

For my class project, I would like to present the 1,001 Nights, which will unconfuse you about some of the important things..

At the front of a middle school classroom in Oklahoma, a boy named Khosrou (whom everyone calls "Daniel") stands, trying to tell a story. His story. But no one believes a word he says. To them he is a dark-skinned, hairy-armed boy with a big butt whose lunch smells funny; who makes things up and talks about poop too much.

But Khosrou's stories, stretching back years, and decades, and centuries, are beautiful, and terrifying, from the moment he, his mother, and sister fled Iran in the middle of the night, stretching all the way back to family tales set in the jasmine-scented city of Isfahan, the palaces of semi-ancient kings, and even the land of stories.

We bounce between a school bus of kids armed with paper clip missiles and spitballs, to the heroines and heroes of Kosrou's family's past, who ate pastries that made them weep, and touched carpets woven with precious gems.

Like Scheherazade in a hostile classroom, author Daniel Nayeri weaves a tale of Khosrou trying to save his own life: to stake his claim to the truth. And it is (a true story).

It is Daniel's. (From the publisher)

Review: The author, Daniel Nayeri (born Khosrou) fled Iran with his sister and mother when he was eight-years-old. Why? Because if they didn't leave his mother would likely have been killed by "the committee" for converting to Christianity. In an interview with Shelf Awareness, Nayeri said this about the book when he was asked if it was biographical: "It's entirely biographical. In fact, the first version I wrote was a nonfiction essay for adults. But it didn't work. The heart of the story was from the perspective of a pre-teen. So, I chose to create that narrator. I changed some names, and I invented dialogue. But otherwise, I think of it as a memoir."

The narrator is Nayeri as a twelve-year-old who is lonely and desperately wants a friend. He decides to tell his classmates stories about his life and his ancestors' lives in the style of Scheherazade, who tells the king a new story every night in order to stay alive one more day.

The structure of the book is like nothing I've ever read before, jumping around from present time (middle school in Oklahoma), to the recent past in Iran, to much further back in Persia. Sometimes the narrator is telling his stories, and other times he is living his life, as miserable as it is.

In the last chapter Nayeri shared some of his memories with his mother, asking if he remembers them correctly. She tells him that his memory is incorrect, that his memory couldn't be correct because of the traditional way that grandparents greet their grandchildren. I had to sigh when I read this. My family is always telling stories about what we did or said in the past. If you ask one person their story is slightly or vastly different than the stories I always tell myself. Maybe all memories make us all unreliable narrators, or as Nayeri says, liars.

I adored this book which won the 2021 Printz Award and though I doubt it will be very popular with teen readers, I highly recommend it to you and all of those reading this review.

Book Beginnings on Friday is hosted by Rose City Reader. Share the opening quote from current book.The Friday56 is hosted at Freda's Voice.  Find a quote from page 56 to share.
Visit these two websites to participate. Click on links to read quotes from books other people are reading. It is a great way to make blog friends and to get suggestions for new reading material.
Posted by Anne@HeadFullofBooks at 8:34 PM