Three Men and a Boat (To Say Nothing of the Dog) by Jerome K. Jerome 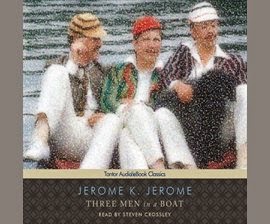 The book Three Men and a Boat (To Say Nothing of the Dog) was written by a humorist Jerome K. Jerome in 1889. The book was also serialized in a publication, Home Chimes, so the reading public got their story in drips and drabs over a period of time. Apparently they loved the silly stories of the three men who took their dog, Montmorency, and went on a boating holiday down the Thames from Kingston to Oxford. The 1st edition sold over 200,000 copies which doesn’t sound that large in today’s market but was huge back then.

Jerome hadn’t intended to write a humorous book. When he started he wanted to write a travelogue to remark on the scenery and intricacy of taking such a pleasurable trip, but the book had a different plan and took on a life of its own. Lucky for us that it did, too, because I doubt a serious book about boating on the Thames in the 1800s would still be in print today. Three Men in a Boat has never been out of print and its popularity has remained high. In 2003 The Guardian newspaper created a list of the 100 greatest novels. Three Men in a Boat was #33 on that list with a note, “One of the funniest English novels ever written.” For comparison sake, The Adventures of Huckleberry Finn was #31 on that same list.

I first read about the book in 501 Must-Read Books where the author identified it as a must-read by saying, “One of the funniest novels ever written, Three Men in a Boat has scarcely dated since its first publication when it was celebrated throughout Europe and bootlegged in America.”  It continued the praise by using phrases like, “hilariously chaotic story”; “very funny vignettes that recount the scrapes the men get involved in,” and “[Jerome] finds humor in the most banal of objects from a tin can of pineapple chunks that is impossible to open, to the description of his friend’s day’s work.” With superlatives like that who wouldn’t want to read Three Men in a Boat? I even purchased a copy for my high school library thinking high school students assigned to read a classic may want to select a humorous one.

Unfortunately my experience with the book was not as hilarious as I expected or hoped. Yes, I did chuckle to myself in a few places but by and large I felt the humor was dated or tied to local references that I didn’t understand. I had a hard time picturing the action, right down to not knowing what the boat looked like. And the side stories, which should have been the funniest bits of the book, often seemed to go on for too long and a few actually irritated me. In my estimation a rating of 33rd best novel is way too high, especially in juxtaposition to Huck Finn at #31. Now that book is clear genius.

To be fair, my experience with Three Men in Boat may have been tainted by the format in which it was consumed. I listened to the audiobook read by Steven Crossley. Perhaps Crossley’s narration wasn’t delivered in a funny enough manner to incite peals of laughter from me, though I did think he did a fine job. I do know from previous experiences with audiobooks, my estimation of books is often different compared to my friends who read the print or E edition. So the delivery may have put me, the listener, in a bad position. I don’t know for sure.

Am I sorry I read the book? No, I am not. Will I recommend the book to others? Sure, but I will give a caveat that they may want to read it more as historical fiction than as a humorous piece. That way they will delighted with few chuckles they have along the way.

Posted by Anne@HeadFullofBooks at 9:17 AM