In Real Life by Cory Doctorow, illustrated by Jen Wang 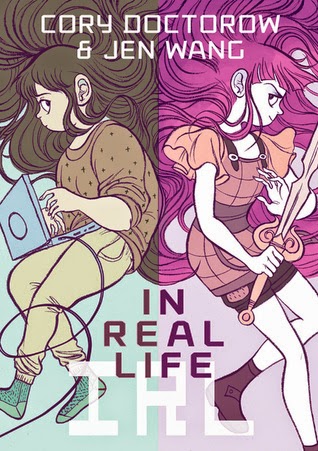 In the graphic novel In Real Life by Cory Doctorow, Anda is a typical teen girl. She loves to play video games, especially Coarsegold Online, a very popular role playing game. Her mother is hesitant to allow Anda to spend so much time playing these types of games for fear of on-line predators. But Anda assures her that it is a girls-only site and she knows not to give out any personal information.

Anda’s avatar is a kick-ass girl who is also a fighter and a hero. In real-life she is an unsure, awkward teen. In the game she attracts the attention of other players, one of whom recruits her to assist in wiping out gold farmers.  Gold farmers are Chinese kids who collect valuable objects in the game and then sell them back to the “rich American kids.”  Anda can even make a little money for destroying these gold-farmers and so Anda decides to go for it. “But things become a lot more complicated when Anda befriends a gold farmer--a poor Chinese kid whose avatar in the game illegally collects valuable. This behavior is strictly against the rules in Coarsegold, but Anda soon comes to realize that questions of right and wrong are a lot less straightforward when a real person's real livelihood is at stake.”—from the book jacket

I really enjoyed Cory Doctorow's writing in Little Brother, a modern retelling of 1984 where Big Brother is always watching. So when I learned that In Real Life won the Cybils Award for best Graphic novel of the year I was eager to read it. I am not a graphic novel aficionado so was hesitant to weigh in with my opinion of a book in this genre. But I should say I really did enjoy the book after the twist when Anda has an eye-opening experience that helps her to make a shift in her maturity and attitude toward others. This graphic novel is a spin-off of Doctorow's short story "Anda's Game" which led to the novel For the Win. When it was decided that the story would be made into a graphic novel Jen Wang was selected as the illustrator. Doctorow, in an interview with Oliver Sata for LA Times HeroComplex, said,


Jen did most of the writing and I want to make sure she gets most of the credit...For the most part, comics are about watching someone else do stuff, not being inside someone’s head as stuff happens.But Jen did all the hard work. She wrote a treatment, and then a script. I went through the script, I edited it, I vetoed a few things. I asked for a few things to be added. All the really good stuff in there is stuff Jen introduced. All the new stuff that isn’t in the story is stuff Jen introduced, and the cool thing about that is that because Jen did the script, and she did an amazing job, I can look at this thing that’s been adapted from my work, and without being conceited in the slightest, I can say how cool it is because it’s not me I’m praising, it’s Jen’s work. It really is terrific.

There you have it right from the author's mouth, this book is terrific. I agree.

Posted by Anne@HeadFullofBooks at 9:20 PM