Books one "must read" before dying... a list of lists

Forever looking into lists of books, I wondered to myself this morning what are the top ten "classic" books everyone agrees one must read before dying. It should come as no surprise that there is no agreement on that list of top ten must-reads. During my search, however, I found myself enjoying the variety of lists.

(To stay on this page, right mouse over the link and open the links in a new tab.)

40 Classic books and why you should read them---this list has some books I've never even heard of before.My favorite part of this list is the little blurb explaining why we should read these books. The blurbs all start with "Because..." The list contains both fiction and nonfiction titles. (Abe's Books)

25 Books to read before you die---many of the usual suspects but also a few I've never seen on a list before. Most aren't considered "classics." This list includes poetry, a children's book, and a graphic novel. There is a nifty one-page PDF copy of the list you can print out. (Powells.)

Many more lists below the fold...

Ten Classic Books Which May Change Your Life---books do change lives. I'd better get busy on this eclectic list. (ListOgre.)

Zuckerberg, read these ten books first---when famous people make lists of books it often seem like it is a list of books they read in high school. Not this list. Zuckerberg is obviously a reader and this list has depth. (CNN.) 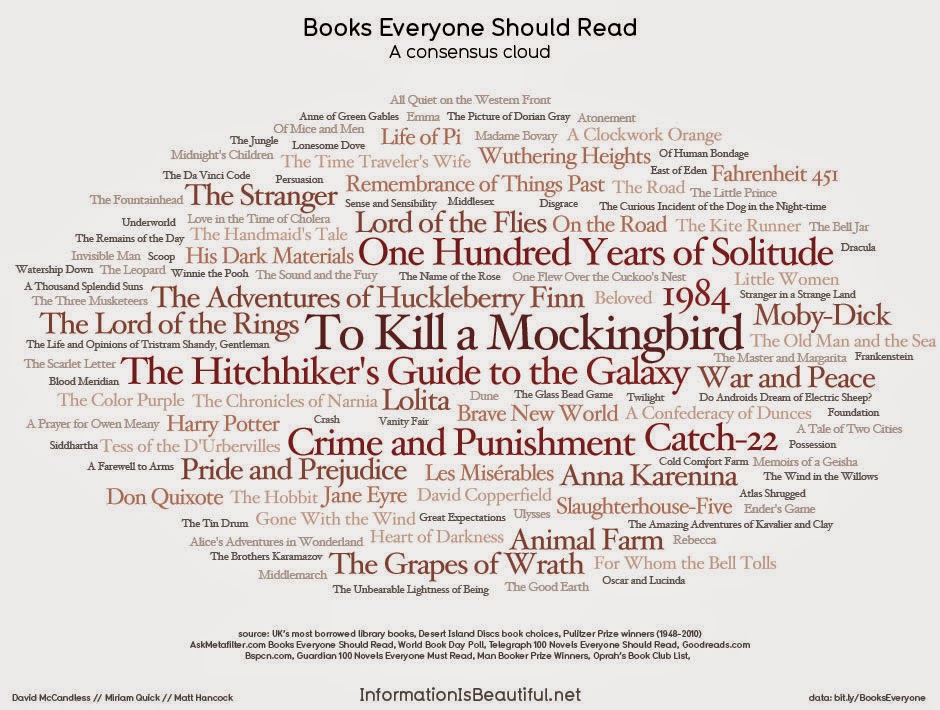 Information is Beautiful consensus cloud of books everyone should read. This consensus cloud, complied by David McCandless, incorporates lists from a variety of sources including the most checked-out books from the library. (The Guardian.)

Ten frequently challenged books everyone should read---includes a list and description of the books and why these books have been challenged. I like to read challenged books because it makes book-banning people mad! ha! (Paste Magazine.)

15 Books Everyone Should Read Once in Their Lifetime---of the books I've read, I am in agreement. This is not a very hoity-toity list. (Why to Read Books.)

Top Ten Books of All Time---This list reflects the rankings of all 152 lists published as of March 12, 2013. Because a variety of sources are used this list does not explain how the list was derived.
(Top Ten Lists.)

Ten Classics that Won't Put You to Sleep---I bet there are some students at this school who would disagree about the sleep part of this list. (Kirkus Reviews on Huffington Post.)

100 Best Novels---as voted by regular people. I don't think this list has been updated for a few years, it says it was last updated in February 2011, but I have always enjoyed it because it has compiled the votes of participants, just regular folks like me. For a few years every time I looked at the list it was changed. Really popular books of the day would make it on the list and then would get bounced off a few months later. (The Best 100 Lists.)

Believe it or not after perusing all these lists I still do not have a definitive list of ten classics I should read before I die. Time to consult the library shelves. Two books here in the GKHS may help elucidate the situation.

The Novel 100 by Daniel Burt (Facts on File, 2004) offers a ranking of the greatest novels of all time. Burt's top ten novels are:
Don Quioxote; War and Peace; Ulysses; In Search of lost Time; The Brothers Karamazov; Moby-Dick; Madame Bovary; Middlemarch; The Magic Mountain; and The Tale of the Genji. Gulp! This is quite an intimidating list and I've read none of them.

12 Books That Changed the World by Melvin Bragg (Hodder and Stroughton, 2006.) Bragg's list is very different than any of the other lists I have provided because he devotes a whole chapter to each of the twelve books he thinks have changed the world in some way. From Newton's Principia Mathematica to Shakespeare's First Folio and the King James Bible thrown in , it is a whopper of a list. For the whole dozen check out the interview with Bragg at The Guardian, April 2, 2006. It would be lovely if I were studious enough to tackle these books. I can, however, brag for a moment because I have read through the entire Bible, just not the King James version.

Well, enough for lists. I guess I am back to making my own lists of books I want to read before I die. Many of the books on these lists are also on my list...which, by the way, is not written down anywhere. Must go and make my own list now...let's see it will start with Middlemarch and something by Dickens...

If you know of any great links to lists of books everyone should read, please add the link to the comments section and I will check it out, maybe even add it to this list of lists. Thanks!

Posted by Anne@HeadFullofBooks at 10:22 AM