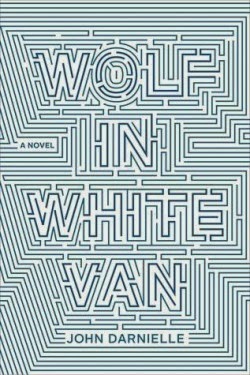 Reviewers on Amazon.com and Goodreads.com seem to be just about as conflicted about Wolf in White Van by John Darnielle as I am. Leah and Drew on Goodreads will prove my point.


1 star. "Upon finishing Wolf in White Van, I spent a good hour reading reviews - what were they seeing that I couldn't? That was back in August. Now, weeks later, I've gone back and looked at those reviews again, the glowing praise, the life-changing commentary. Still I'm not getting it and that more than anything is what frustrates me."


5+ stars. "I sat for 20 minutes after finishing the novel, staring out at the East River, and thinking. The complexity at work here made me want to start it up again - but I didn't want to ruin the moment, as it were. It's the sort of book that both demands a second go and insists that you leave it alone."

Both Leah and Drew admit that the book is complex. That is an understatement. Leah can't stand it and Drew loves it. I go back and forth between the two and I don't live in the middle land at all.  Let me explain but I warn you there are SPOILERS ahead.

When Sean is seventeen years old he has a face-disfiguring accident...or so we are told at the beginning of this book, which is cleverly a story told in reverse. As we read on we come to understand it was not so much an accident as it was an incident, one involving a gun. By the end of the book we know it to be a botched suicide attempt.

After the accident, while Sean is recovering in the hospital, as a way of distracting himself from the pain and the ringing in his ears, he creates an alternate world, role-playing game, Trace Italian. He created it in part because his external world was so awful, he was "faced with the choice of either inventing internal worlds or having no world to inhabit."

After he gets out of the hospital and is facing a life with a new normal Sean decides to launch Trace Italian and actually is able to make a bit of money through his venture where participants subscribe and he sends them a task which they do. They are then faced with a decision and mail Sean their choice, which in turn releases a new task. All of this in done through the US Postal service. Each task offers many choices and the decision to go in one direction then leads to another decision, and so on. Choices becomes the theme of the game and the game parallels life.

The book is very clever and one of those books that, like Drew says, requires thought and perhaps a reread. For example, I have already gone back and reread the first chapter just to see what I should have paid attention to at the beginning (which was really the end) of the story. It is all fairly confusing, but cool at the same time.

But here is the thing that causes my five-star review to plummet to a one-star review.  Wolf in White Van was selected as an Alex Award book this year. Alex Award books are adult books with crossover appeal to teens. YALSA's Alex Committee looks for "outstanding titles that are of interest and value to teenagers."


Wolf in White Van definitely has an excellent setting and style and the characterization and design are tremendously unique. It, however, is NOT a teen book just because Sean is seventeen when the "accident" happens. The story ends on a botched suicide attempt, for goodness sake. As I read the last page I sat in a stunned state. A book that ends on a suicide was selected as an Alex Award book? Really? I bought this book for my high school library. Should I even put the thing on the shelf?

Since my initial reaction of shock and horror I've read numerous reviews and my reaction to the book has mellowed. What I've started to understand is the book is really about choices. Sean made a choice when he was seventeen years old. It was a dumb choice and he will live with the consequences of that choice for the rest of his life. Every day he makes choices, and though he is still lonely, he has made peace with his existence.


Wolf is about the way storytelling can deliver you, though not always save you, from the blistering, profound pain of adolescence – or just existence. "It's hard to overstate how deep the need can get for things to make sense," Sean says, and he is right. The mystery of life, as with the novel, isn't just learning what happens next; it's understanding what's come before.---Carmen Maria Machado from the New Yorker, reprinted on NPR.

Will I shelf this book in my library? Yes. Will I recommend it to readers? Yes, but only if the student is a strong, mature reader.

Have you read the book? What are your thought? I'd love to hear from you here in the comment section or send me a link to your review.