The History of the World in Six Glasses by Tom Standage 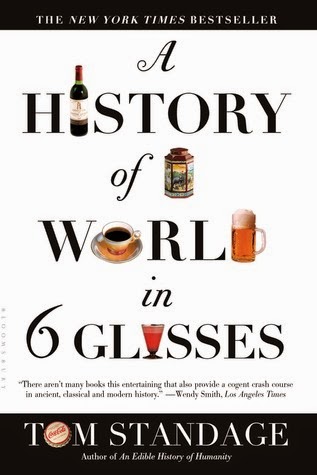 If only all history books were are fascinating as this book by Tom Standage, The History of the World in Six Glasses. The premise that six beverages---beer, wine, distilled beverages, coffee, tea, and Coca Cola---have, to a large degree, shaped the world we live in and have dictated trade, agriculture, even nation- building. There is too much to report to give a full accounting of this tremendous book but here are a few take-a-ways:

Beer: was the first beverage besides water, milk, and possibly juice. There is some evidence to suggest that it is because of the popularity of beer that nomadic people settled down and planted crops (grains) and even started to live in communities. As far back as King Tut days beer was the drink of choice. Hops were not used in beer making until relatively recently, so the beer of yesteryear would have been a bit sweeter tasting than the beers of today. Beer was probably first made in the Fertile Crescent (present day Iran or Iraq.)

Wine: was also first made in the Fertile Crescent. As it became popular it was the drink of the upper-class until everyone had their vineyards and that could no longer be said about it. The Greeks drank their wine watered down with water. Romans got pretty snobby about their wine and they liked their wine aged, the older, the better. Shipwrecks that have been found from these ancient times often have many, many barrels of wine aboard, demonstrating how wine was a major trade product of the day.

Distilled spirits: the first distilled beverage was probably brandy, a process derived from wine. It was found to be an easier to transport than wine and didn't spoil as easily. the first cocktail was named grog by the sea captain, Edward Vernon, who created it---rum, lime or lemon juice, and sugar---making it palatable. Slaves brought to the Caribbean for the sugar industry were also tapped to assist with the making of rum from the molasses, a byproduct of the sugar cane. Whiskey, a very American drink, was often the drink of choice of famous Americans and frontiersmen. George Washington even  had a still and made whiskey in his last years of life.

Coffee: originated in Arabia and was most often distributed through coffee houses, alternatives to taverns and bars. These coffee houses, especially in England became places of lively discussions the discourse. Like-minded people would frequent the same coffee houses and some would even use them as their mailing addresses. Several famous scientists of the day, Hooke, Wren, and Halley, liked to gather one such coffee house. The challenge went up to see if a theorem could be found that explained the rotational ellipsis of the planets. Eventually Isaac Newton supplied the answers. Even today coffee houses seem to fill the same niche in society---as places to gather with friends and discuss ideas.

Tea: Surprisingly tea wasn't introduced to Europe until the seventeen century, but by the end of that century virtually everyone in England drank it. The trade between China and Great Britain that was required to supply this amount of tea was tremendous and caused Britain to seek other places in the world to supply their need for more tea. This led to colonization of India and eventually all kinds of problems for China later on.

Coca-Cola: the last of the six beverages to be introduced is a very American drink: Coca Cola. The history of this bubbly favorite represents both the good and the bad of American influence in the world. Now it can be viewed as a leading indicator of globalization.

"This book argues that each drink is a form of disruptive technology, a catalyst for advancing culture which demonstrates the intricate interplay of different civilizations. Read this book, and you may never look at your favourite drink the same way again." ---from the book description

I am looking forward to discussing this book with my book club this coming summer.

Posted by Anne@HeadFullofBooks at 8:40 PM