TTT: Books that started a reading frenzy on the same topic or by the same author 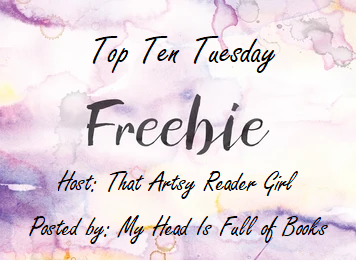 Top Ten Tuesday: Books that started a reading frenzy on the same topic or by the same author 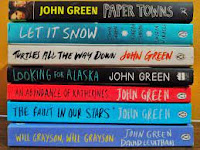 1. Looking for Alaska by John Green
LFA was one the first YA novels I read when I became a teen librarian and I have never looked back, devouring each of John Green's books as soon as they are published and rereading them when no new ones are forthcoming. This has been more of a slow motion frenzy since he hasn't published that many books (7) since I read his first one, Looking for Alaska, in 2005

2. The Paris Wife by Paula McLain
After reading this novel about Ernest Hemingway and his first wife, Hadley Richardson, I went on a short frenzy about Hemingway, starting with his nonfiction book A Moveable Feast about his days living in Paris with his first wife. Then I moved on to reading one of his novels, The Sun Also Rises. I am not a huge fan of his writing style but I was still intrigued enough to watch a movie about his early experiences in war called "In Love and War" starring Sandra Bullock and Chris O'Donnell. I also did quite a bit of personal research about the Hemingways and other writers who were their friends: F. Scott Fitzgerald and James Joyce among them. During this time I also became a bit obsessed with the author, Paula McLain. I attended a program where she was the featured speaker and read another book by her, Circling the Sun, which started me on an even bigger reading frenzy.

3. Circling the Sun by Paula McLain
Circling the Sun was the catalyst for what I considered my Africa obsession. It is a novelized memoir of Beryl Markham who for most of her life lived in British East Africa (Kenya before it was Kenya.) I was fascinated by Beryl Markham and read her own memoir, West with the Wind, once I was finished with the novel by McLain. West with the Wind was published in 1942 and almost went into obscurity until Hemingway read it and about it said, "This is a bloody wonderful book." I agreed. I went on to read the only other book I could find written by Markham, then I circled back and watched the movie "Out of Africa" and read the book by Karen Blixen, a contemporary of Markham living in Africa at the same time. I hated the book Out of Africa and reading it brought my Africa frenzy to an abrupt end. 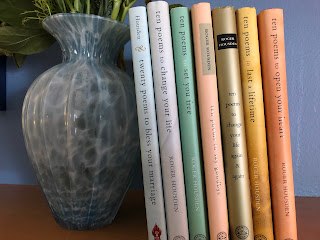 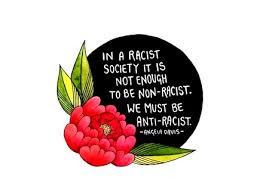 5. Me and White Supremacy by Layla Saad
After George Floyd's murder I went on a binge reading as many books as I could get my hands on to help me to become an anti-racist. Me and White Supremacy was the first book I read on this topic and it was a book club choice. I've gone on to read many other books on this topic and haven't stopped yet. See this post Books to Help Me Become an Anti-racist. 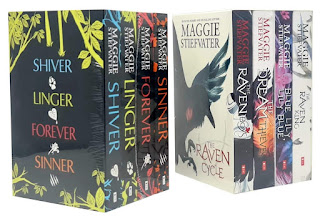 6. Shiver by Maggie Stiefvater
Back in 2010 I read Shiver, the first book in the Wolves of Mercy Falls series by Maggie Stiefvater. I wasn't really into werewolves or zombies or vampires but I became a huge Stiefvater fan even though this one was about werewolves. I especially liked her stand alone book, Scorpio Races and her Raven Boys series. I think I've read everything she has published except her very earliest stuff and I keep my eye out for new titles. 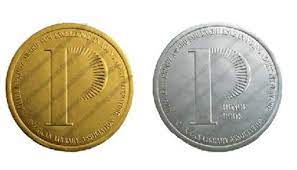 7. Printz Award books
Back in 2010 I attended a library conference where one of the presentations was on how to conduct a Mock Printz event. I was hooked from that day forward I spent a lot of time and energy trying to figure out which books would win the coveted prize each year employing the efforts of a legion of students for our GK Mock Printz efforts. I loved it and so did the students. This hyperlink is the blog post I created prior to my very first Mock Printz event in 2010. Over the years most of my favorite YA titles were Printz Award or Printz Honor winners. Here are a few titles I especially loved from the list: Tales of the Madman Underground (Barnes); I'll Give You the Sun (Nelson); The Passion of Dolssa (Berry); and Eleanor and Park (Rowell) to name a few. Now that I am retired I find that I have less interest in reading YA award titles and more interest in reading adult award books so I shifted my passion onto reading Pulitzer Prize books and National Book Award winners.

8. Anything Jane Austen
I don't know when my obsession with Jane Austen books started. I've actually reviewed very few of her books on my blog, so I guess this obsession began before 2009, my first year of blogging. Of course I've read all of her novels and I can't decide which one I like best. I've watched many films made from her books over the years and then rewatched them. I've read retellings of her books, and books about her characters, books about Jane Austen herself, and what it was like to live in the Regency period. I call myself a 'Janite.' And my idea of perfect vacation destination site would be to visit Chawton House, the last home Austen lived in before her death. Here is a fun blogpost I created where I pretended I was interviewing Jane Austen. This Austen phase does not seem to be slowing down at all and it has been going strong for years!

9. Beatles!
In 2017 Sirius radio opened up a Beatles channel which plays nothing except Beatles songs, Beatles covers, and songs that inspired the Beatles. I became obsessed writing blog post after blog post about my Beatlemania (Here is the first one) and I started reading all the books I could get may hands on about the Beatles. My favorite, by far, was Dreaming the Beatles by Rob Sheffield which made me realize there were people out there who way bigger fans than me. Ha! Though I am still a huge fan, my radio listening choices have evolved into a much more eclectic list with just the occasional Beatles tune on it.

Posted by Anne@HeadFullofBooks at 5:57 PM