"This really is a bloody wonderful book": Circling the Sun 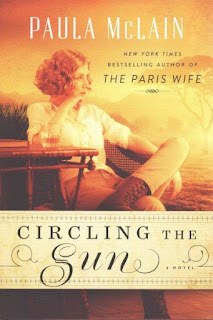 Circling the Sun by Paula McLain is a novelized memoir about Beryl Markham who lived in British East Africa ("before Kenya was Kenya") for most of her life. The story focuses on Markham's early years through her twenties. She tells her story as a remembrance while in the cockpit of her airplane, a plane she is attempting to fly across the Atlantic from East to West in 1936. Spoiler alert, she makes it, well, sort of, and goes on to write her memoir, West with the Night, in 1942.

Markham lived a very colorful life. She was abandoned by her mother at a young age and was raised by her father, a racehorse trainer. Her best friend as a child was a native boy and she wanted to be a Kipsigis Warrior when she grew up. What she did become was the first female horse trainer in Africa, maybe the world, and an accomplished pilot. Both of these things shocked the folks in high society of the 1920s. Markham always seemed to be either in or out with these folks and her fortunes rose and fell. She had two divorces (unheard of in those days) and several other affairs.

Her most famous alliance was with Denys Finch-Hatton, an adventurer and big-game hunter, who was played by Robert Redford in the 1980s film, Out of Africa, which was based on the memoir written by Karen Blixen, aka Isak Dinesen. Apparently Hatton and Markham had an affair as his affair with Blixen was waning. It was Denys who got Beryl interested in flying and her interest didn't wane even after he died in a plane wreck on a flight she was supposed to be on.

Beryl Markham mythologizes many events in her life which gave her a sense of  invincibility. She had scrapes with horses, snakes, lions, and airplanes. All of them could have killed her but didn't. Her memoir, West with the Night, sold only modestly and then went out of print. Her life would have become a complete unknown had it not been for Ernest Hemingway who read her book and wrote in his notes, "This really is a bloody wonderful book". When Hemingway died his son found the note and located Markham, still living in Kenya and eeking out an existence as a horse trainer. Her book was republished and was well received. She lived out the rest of her life in relative wealth.

I have to confess that I am a little obsessed with Beryl Markham right now. After finishing Circling the Sun I paid $3.99 to rent the video Out of Africa starring Redford and Streep. Though Karen Blixen didn't mention Beryl Markham in her memoir she was their contemporary and friend. Watching the film made me see again what Markham's early life would have been like. I've checked out Blixen's memoir from my library and borrowed West with the Night for the summer from the only school in the district which had it. I've only read a few pages of each of the books but I am fully prepared to complete both of them.

Paula McLain did it again. My obsession with Markham right now is very similar to the obsession I had with Hemingway after I read her other novelized memoir, The Paris Wife. In that novel we meet Hemingway at the beginning of his writing career and his first wife, Hadley Richardson. After I read that book I had to read several books by Hemingway and did lots of Internet-type research on his life and about other famous folks he hung out with, Fitzgerald, Stein, and Joyce, to name a few. That novel focuses narrowly on Hemingway and his associates. This novel, Circling the Sun, not only focuses on Markham and her doings, but also on the culture and the beauty of Kenya and of Africa. It really makes the reader feel as if they are right there in Kenya, before it was Kenya.

This book is also a "bloody wonderful book". Not to be missed.

Disclaimer: I borrowed the audiobook from my public library, with Katharine McEwan narrating. What a wonderful treat it was to hear this book read aloud with all its Kenyan names and places. It was a blessing to have someone who knew what she was doing to deal with the pronunciations. I recommend this format.
Posted by Anne@HeadFullofBooks at 8:59 AM