A Steep and Thorny Way, an aha and a review 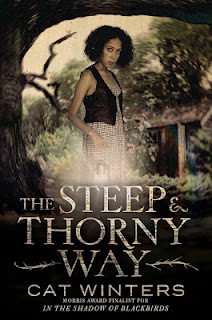 This review of A Steep and Thorny Way by Cat Winters is a long time in the making. I read the book in April then let it simmer on the proverbial back burner of my reviewer's mind for too long. I read the book almost two months ago, could I possibly remember the details well enough to write a coherent review? I wasn't sure so I visited the author's website to gain some inspiration. Here is how her publishers sum up the book:


Inspired by Hamlet and infused with the real history and feel of Prohibition-era Oregon, The Steep and Thorny Way is a gripping and thoughtful story of intolerance, forgiveness, and finding one's own path.

I've never actually read Hamlet or seen it acted out. But I am very familiar with its plot and many of its famous quotes, like "There is something rotten in Denmark." Oh cool. Let me change the words and adjust it to fit this book...

"There is something rotten in Oregon."

There certainly is something rotten in Oregon. The book is set during the Prohibition-era in Oregon in a community dominated by the KKK and racist activists, and general intolerance. Hanalee is biracial. Her African-American father and her white mother's marriage isn't even recognized in the community. When her father is killed by a drunk driver, Hanalee's mother remarries the county doctor in a very short time. But now Hanalee is suspicious he had something to do with her father's death.

As I pondered what I was going to say about this book I wondered if the title, A Steep and Thorny Way was also from Hamlet. A quick Internet search answered my query.

Do not, as some ungracious pastors do,
Show me the steep and thorny way to heaven,
Whiles, like a puffed and reckless libertine,
Himself the primrose path of dalliance treads
And recks not his own rede.
---Hamlet, Act 1:3

Aha! I found it. This book by Cat Winters revolves around this poem from Hamlet. The people in the community where Hanalee lives are very self-righteous and they say their Ku Klux Klan organization is just to promote positive civic opportunities. Yet the KKK in Oregon did the same things as elsewhere in the country, it opposed and harassed African-Americans, homosexuals, even Catholics. As we know from history, members of the KKK purported to be Christians yet did not extend Christ's love to everyone, like a reckless libertine not willing to walk the steep and thorny way to heaven themselves.

We know in Hamlet that the ghost of his father comes back to warn him that his uncle, who is now married to his mother, was his murderer. Hanalee's father also comes back as a ghost to warn her of how he was killed. Both Hamlet and Hanalee are filled with a tremendous urge for revenge.

The time is out of joint, o cursed spite
that ever I was born to set it right
----Hamlet, Act 1.5

Hanalee finds that she is wrong about many things. She finds friends among those she originally thought were enemies. She found ways to fight injustice and was able forgive some of those who wronged her. In the end we feel assured she has a brighter future ahead of her.

Cat Winter's A Steep and Thorny Way is “a fast-paced read with multiple twists, the novel delivers a history lesson wrapped inside a murder mystery and ghost story. " -Kirkus reviews

Disclaimer: I read this print book from my own library. It qualifies as a 2017 Printz contender. As happens often with me, I liked the book better upon a time period of reflection. My original rating was 4 stars.  I hope that many of you read it and let me know what you think.