The Serpent King by Jeff Zentner 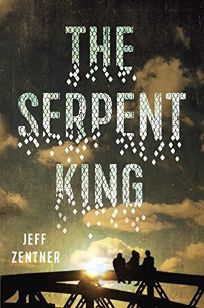 Several years ago I watched a documentary on TV about the practice of snake handling in some churches in Appalachia. The reporter, who went into the project with an open but skeptical mind was probably thinking he would be doing an exposé on the beastly and dangerous practice, but ended up handling the snakes himself. I often thought about that show. The lure of doing something dangerous in a kind trance, kind of like the whirling dervishes of old, has a certain appeal for many people. I thought about all this when I picked up debut author Jeffrey Zentner's The Serpent King this past week. I wondered if the book would predominantly be about the practice of snake handling in church and how I would react if it was.

The Serpent King is thankfully less about snakes and more about friendship, belonging, and making one's own way in the world. Dillard, Lydia, and Travis are misfits in their high school in Forrestville, Tennessee. Their town, Forrestville, is named for the founder of the Ku Klux Clan, Nathan Bedford Forrest, which is not something to be proud about. Dillard's father was a pastor at a church which believed in the signs of the Holy Spirit which included handling snakes. His father is now incarcerated for possession of child pornography. Both of these things make Dillard a pariah in his community. Travis is a huge yet gentle boy who prefers reading a fantasy book series, Bloodfall, than anything else. His family life is a living hell. Lydia writes a fashion blog and refuses to think inside the typical teenage box. The three teens carve out a close and supportive friendship. The reader enters their story a day before school starts their senior year and ends the summer after it. Throughout the year they all go through tremendous trials and growth.

I was very touched by the story of the three friends. In fact, I shed many tears over it. It is a fine example of a coming-of-age story with the characters learning about themselves and others along the way. Very little of the story focuses on snakes but quite a bit focuses on various forms of parental abuse and neglect. Only Lydia has healthy, happy, and helpful parents of the three.

That said, I have a request for YA authors. Would someone please write a YA book which has a healthy religious experience without the character feeling stifled by the faith of their fathers or the weird practices.  And while you are at it, don't make it preachy. Is that too much to ask? Based on what I've read in YA lit, religion is only for crackpots and the parish members are all small-minded and judgmental. This book is an example of this. Instead of being devote and loving, Dillard's parents are judgmental and backwards. Ugh.

Did I like the book? Yes and no.  No for the reasons I cited above. Yes because I liked the coming-of-age story a lot. I liked the main characters and their friendship. Even though I didn't like everything that happened to them along the way, I liked the path the story took. I hope you read it and let me know what you think.

Disclaimer: I listened to the audio version of the book. I purchased the audio CD-set with my own money.

Posted by Anne@HeadFullofBooks at 8:00 PM