75 best books of the past 75 years---Parade Magazine 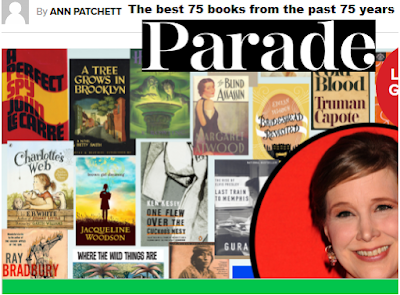 I've been reading Parade Magazine, stuffed into our Sunday newspaper, as long as I can remember. I've always enjoyed it with its little newsy section on celebrities, its recipes, numbrix, and, of course, its one longer article on some topic of interest. This past Sunday that longer article of interest was written by Ann Patchett, author of Bel Canto, and the topic was the 75 best books of the past 75 years in celebration of the 75th anniversary of the magazine. I, of course, just gobbled it up, then went to the webpage to get more details on the selections. When Ann Patchett was initially asked to create the list she said no. She didn't want her email stuffed with angry letters demanding answers as to why she hadn't selected this or that book. Then she decided to tackle the challenge as long as she could get input from others working at her bookstore in Nashville. What they decided upon is certainly the best, or some of the best, books of the last 75 years. Though I would argue that a few were left off. I guess there is no perfect list.


Check out the Parade list of 75 best books from the last 75 years here.
(Open in a new tab so you will also have this page open at the same time.)

Ann said the committee decided to only select books written by Americans but one gal threatened to quit if Harry Potter wasn't on the list, so they decided to qualify for the list the book had to be written in English. Also, since they are drawing from only 75 years forward, some shocking books aren't on the list like Gatsby and Grapes of Wrath. Even though 75 years is a long time, the list seems surprisingly modern without any of the old white guys on it (Dickens, James, Fitzgerald, etc.)

Here is a link to my page, a re-creation of the PDF of the original list. On it I have placed stars next to the 29 books I've read. Sadly I've read none of the poetry listed and only a few of the nonfiction: Jaqueline Woodsen's memoir, Brown Girl Dreaming; Stephen King's On Writing; and Howard Zinn's A People's History of the United States, thanks to Carly and her AP US History class. Other notable books I am happy to see are---
Pratchett mentioned that the Harry Potter series got a whole generation of children reading again, so, of course it had to be on the list.  It is every librarian's dream that another series as exciting and spectacularly written would come along for this new generation.

Of the book I've not read, the most intriguing books to me are: The Long Goodbye by Raymond Chandler; The Perfect Spy by John Le Carre; What is the What by Dave Eggers; and When Breath Becomes Air by Paul Kalanithi. Oddly, one of my book clubs just finished reading My Name is Lucy Barton by Elizabeth Strout a month ago. Apparently it was a timely selection. It is impossible to read such a list and not want to add more books to the already teetering pile of TBR (to be read) books.

Posted by Anne@HeadFullofBooks at 12:19 PM