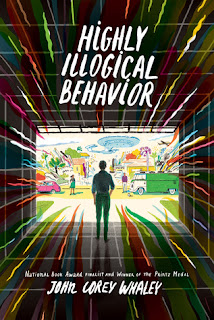 John Corey Whaley, author of the award-winning book Where Things Come Back and a teen favorite Noggin, has hit another in-the-park home run with his latest book Highly Illogical Behavior.

The story centers around Solomon, a teen who hasn't left his house for the past three years, not even to go into the backyard. His agoraphobia is so pronounced he has been trapped indoors since that awful day in 7th grade when he stripped off his clothes and sat in fountain in his underwear in front of all of his classmates. Lisa witnessed Solomon's meltdown and she always wondered what had happened to him, even though she didn't really know him. Three years later when Lisa saw Solomon's photo at her dentist's office she hit upon a plan which she hoped would help both of them. Lisa decided she would befriend Solomon and help him get over his anxiety about leaving the house then she would write about her experiences in her college scholarship application hoping to secure a coveted full-ride offer. The only person who knows about her plan, at least at first, is Lisa's boyfriend, Clark, and he tries to talk her out of it.

After Lisa (and Clark) befriend Solomon they find that they have a lot in common and really enjoy hanging out with him. But, as in a lot of YA novels, a love triangle develops, but because of miscommunication it just about destroys everything for everyone.

I appreciate several aspects of this book. First, Whaley writes likable, engaging characters. and these teens grow as they go through experiences. All the characters are multi-faceted, with the possible exception of Lisa's friend Janey. She was an important part of the story, but I didn't like her. Secondly, the adults in the story are present, helpful, and loving, for the most part. This is a rarity in YA lit. Thirdly, Whaley seems to understand that a person who has an anxiety disorder isn't necessarily "crazy". Neal Shusterman, author of Challenger Deep, my favorite YA book last year, and father of a young man who has struggled with mental illness, wrote in his review of Highly Illogical Behavior in the NYT,


Whaley portrays these characters with the same sensitivity and honesty he brought to his previous novels... These are people you feel you know, or wish you knew, or are slightly afraid to know, but you’re drawn to all the same. He conveys the plight of an agoraphobic teenager with deep empathy — in spite of what Lisa thinks, Solomon is not broken. He’s a kid with a formidable problem, who has shaped his life into a workaround that keeps him happy, and functional. (Shusterman, NYT, May 5, 2016)

I really like how Shusterman frames the issue. Solomon is "not broken, he has a formidable problem but he is happy and functional." In the end we end up rooting for Solomon to make it out of the house, for Lisa to do what is right, and for Clark to own up to his issues, too. We also figure out that the title refers to all three of the teenagers who need to learn how to navigate through mistakes as they make their way toward maturity.

My rating: 4 of 5 stars. I checked the book out from my public library.

-Anne
Posted by Anne@HeadFullofBooks at 9:46 PM