Weather: fine. A few greyish clouds are floating by but it looks like work-in-the-yard weather, not too hot, not too cold.

History Made: This week, for the first time in America's history we have nominated a female candidate from one of the two major political parties to be President of the United States. Finally! history is being made. If you haven't see this video, I recommend it. It is very inspiring.


Praying for Orlando, Florida, for the families of all the victims of terror and gun violence: This wasn't a good weekend for Orlando. Friday night Christina Grimmie, a young musician and a one-time contestant on The Voice, was gunned down by some guy (a spurned fan?) and Sunday morning over 100 people were killed or wounded in a domestic terrorism attack on people partying in a gay club. My heart is breaking.

Elizabeth Warren explains the importance of the Judiciary branch and how Donald Trump and the Republican party are trying to mess with it.  This is long (30 minutes) but is is very revealing. I don't usually use this blog as a spot for politics but this week with Trump calling a decision made by a Federal Judge to be erroneous because the judge is a Mexican (he's not), made my blood boil. Click the link here, but please open in a new tab.

We've been pranked: the school year is coming to an end (six more days) and you know what that means: senior pranks. This year the senior class outdid themselves. They booby trapped the whole school with saran wrap, balloons, and crepe paper. It was hilarious.  They just stood around watching everyone try to figure out how to get up the stairs or down the halls.  Good job Class of 2016. You got us! See photos.

Books currently reading:
Finished reading this week:
Pressure washing the deck:  Yesterday Don and I pressure washed half of our back deck. It is made of that recycled material called Trex. It isn't the world's best product for the Northwest since it does it discolored and allows moss to grow on it.  My job was to brush the cleaner before Don power washed it.  Then I would follow behind him using a paint scraper to get up the moss and lichen which had grown between the slats. It was a very wet winter as Don kept reminding me.

Scones: We decided to have brunch after church but had to deal with the foodstuffs we had on hand. We dug out this old scone recipe book. I think the last time it was used was 1997. Carly selected and made the most delicious scones I've ever had, Classic Cream Scones. 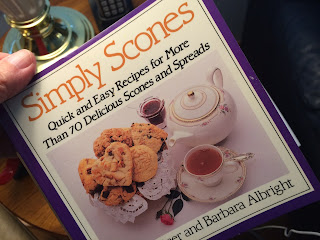 My thoughts and prayers are in Orlando right now.

Posted by Anne@HeadFullofBooks at 1:27 PM