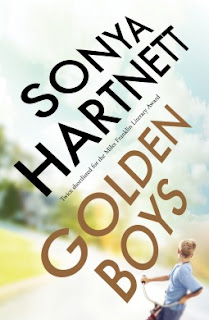 In one of the first chapters of the Golden Boys by Sonya Harnett, 11-year-old Declan takes a punch from the neighborhood bully, saving his younger and smaller friend, Avery, from harm. This scene foreshadows what is to come in this moody coming-of-age tale, with the wrong person often taking the punishment that an adult really deserved.

The neighborhood where Declan and Avery live is vaguely reminiscent of my neighborhood when I was growing up, with kids riding their bikes up and down, going much further afield than adults ever imagined, always finding something to do outside. There is never a mention of a year but it is obviously a date before cell phones or computers. I think it is set in Australia only because they call the snack shop a "milk bar" and the author is Australian, but otherwise it could be anywhere. Into this setting the Jenson family moves with their two boys, Colt, a 12-year-old, and his younger brother. These boys, unlike the other ragtag group of friends, seem to have every possible toy any boy could ever want---skateboards, trains, a BMX bicycle, basketballs, even a swimming pool. It is Colt's father, Rex, who always invites the other boys over to play. And right away the reader (aka me) starts to get a creepy feeling that Rex has an ulterior motive for asking the neighborhood boys to come over to play.

Golden Boys has two narrators, Colt and Freya.  Colt is the eye-witness to what happens with his family, especially his father. At one point Colt realizes that his father buys so many toys so their house will be an enticing spot for other boys to visit. The toys thus become bait. And Freya, Declan's older sister who is also twelve, hates what she sees happening in her family with an alcoholic father and disinterested mother with too many siblings and not enough room for all the children in their small house. Both make attempts at righting what they see as wrong and both attempts are twarted by adults who should know better. In effect Colt and Freya took the punishment their fathers should have received.

I found myself almost mesmerized by this book. The themes of pedophilia, alcoholism, and abuse are really heavy topics. Yet I was almost transfixed by the writing, the setting, and the neighborhood scene which unfolded before my eyes. I remember feeling the same way about Lolita when I read it several years ago. The topic was depraved but the language was exquisite. I felt drawn to and repelled by the book in equal measure. My experience with Golden Boys was very similar. I hated it and loved it equally.

The title of the book caused me to pause and think. Were Colt and his brother the golden boys because they had every toy any boy could ever dream of? Or were the father's golden because they got off without experiencing consequences to their abhorent behaviors? Before moving to this neighborhood Colt has earned medals for track and field. His little statues of a boy running were displayed on his book shelf. Little golden statues of a boy in a running pose. Was he running toward his goal, the finish line, or was he running away from something?

I believe this book should be a Printz contender because the writing is so strong, so is the development of the characters and the use of symbolism. But I don't think it will win any popularity awards. As I was looking around online I learned Golden Boys was published in 2014 in Australia as an adult book. That didn't shock me at all. It seems like publishers in America are much more likely to take a book which has young characters and make it a YA book rather than looking at the subject matter and determining the theme to be more appropriate for adult than children. This book is not sexually explicit or overtly violent. It brings up uncomfortable topics but these are topics children may have to deal with. Young adults should be trusted with material which might seem too mature for them if it is handled in the right way. Golden Boys handles tough topics so well I would have no hesitations getting it into the hands of high school students.

Disclaimer: I listened to the audio version of the book which I purchased with my own money. The voice actor, David Vatousios, did a very nice job narrating the book. My rating: 4 stars.

Posted by Anne@HeadFullofBooks at 10:32 PM