West With the Night by Beryl Markham, a classic if I've ever read one. 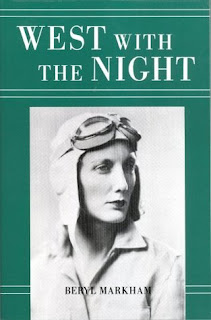 Last  month my book club's selection was Circling the Sun by Paula McLain, It is a novelized memoir of Beryl Markham's life. After finishing that book my attention immediately shifted to the original, West With the Night by Markham herself. The book was published in 1942, and though it got good reviews it fell into almost immediate obscurity. I think the timing wasn't good with a war on and all.  It would have remained out-of-print and little known but in 1983 some papers of Ernest Hemingway were found by his son. In them Hemingway praised Markham's book and her writing to his publisher Max Perkins,


…As it is, she has written so well, and marvelously well, that I was completely ashamed of myself as a writer…she can write rings around us all… The only parts of it that I know about personally, on account of having been there at the time and heard the other people’s stories, are absolutely true… I wish you would get it and read it because it is a really a bloody wonderful book.

Markham was still alive living in poverty in Kenya in 1983 and the re-publication of her masterpiece allowed her to a live out her life in comfort.

Unlike most other memoirs I've read, West With the Night reads much more like an adventure novel, or a travel journal, or a collection of short stories not necessarily presented in chronological order. Markham was born in England in the early 1900s and moved to British East Africa (before Kenya was Kenya) with her father in 1903 as a colonist. He was a farmer, a businessman, a horse trainer. She was a wild thing who wanted more than anything to be a warrior, went a boar hunt which nearly killed her favorite dog,  and was "moderately eaten" by a pet lion. Each chapter represents a memory of Markham's life in Africa, or as a horse trainer herself, or as an aviator once she learned to fly. My favorites were the Africa stories.


“There are as many Africas as there are books about Africa -- and as many books about it as you could read in a leisurely lifetime. Whoever writes a new one can afford a certain complacency in the knowledge that his is a new picture agreeing with no one else's, but likely to be haughtily disagreed with by all those who believed in some other Africa. ... Being thus all things to all authors, it follows, I suppose, that Africa must be all things to all readers.

Africa is mystic; it is wild; it is a sweltering inferno; it is a photographer's paradise, a hunter's Valhalla, an escapist's Utopia. It is what you will, and it withstands all interpretations. It is the last vestige of a dead world or the cradle of a shiny new one. To a lot of people, as to myself, it is just 'home.”

If a hunter goes on a safari in Africa he/she only knows that part of of the continent's story. If missionaries go to Africa to win souls, will they really experience the soul of the land? Markham would argue that few people outside of Africans themselves would ever know and understand this incredible land because they come to it with ulterior motives.

We know, or think we know, quite a bit about Markham's contemporaries: the Baron Bror von Blixen and his wife Karen and their friend, Denys Finch-Hatton because of the famous book and film, Out of Africa. Though Beryl had an affair with Finch-Hatton, she only talks about him a little in this book and only about his flying and his death.

She writes more about her friendship with Bror von Blixen because she becomes a pilot spotter for his elephant safari business. The chapters about elephant hunting where they worked together were the most difficult of all to read because, of course, elephants are now endangered and no one should be hunting or killing them. But I had to remind myself continually that Beryl and the Baron were doing this in the 1930s before people understood the fragility of the animal kingdom in the face of human incursions.

The title of the book West With the Night was in reference to Markham's remarkable flight from England to New York, via Nova Scotia in 1936, the first female to make this solo flight across the ocean, she said she was almost continually flying with the night.

Unlike Circling the Sun, readers will learn nothing from this book about Markham's love life, her husbands, or about her son, who lived in England with his father. So really the book isn't about Beryl Markham it is really about three things: horse training, flying, and Africa itself. Markham is just the story-teller.

I would be remiss if I didn't mention that there are quite a few scholars who believe that Markham didn't actually pen this book. They believe that it was ghost written by her third husband, Raoul Schumacher. I was asked by other book club members if it bothered me if indeed it wasn't written by Markham. After a brief pause I decided it didn't. The book is exquisitely written and the stories belong to Markham. Markham's biographer, Mary Lovell, asked Markham about the controversy because she had always maintained that she was the sole author of her book.


Beryl herself was totally unconcerned about the theory that she had not written the book. When I discussed the subject with her, she dismissed it, 'Oh, that darn thing again?" Asked how she answered her detractors, she shrugged and said, 'I don't bother...' (Lovell, 1987)

That settles it for me.  Just because someone doesn't have a lot of formal education doesn't mean they are stupid. Shakespeare is a case in point.  Markham also wrote a few short stories, published in a book called  The Splendid Outcast which adds to the proof, in my mind anyway, that the gal could write.

Markham mused on the first line of the book, “How is it possible to bring order out of memory?”  West With the Night is her attempt to do just that. And for her memories I am grateful because now I too can travel to Kenya through the beautiful words on a page and live with her as she recalls a few precious memories of a time gone by.