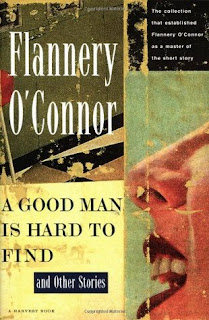 One of the best things about reviewing a classic book like A Good Man is Hard to Find by Flannery O'Connor is that it really isn't necessary to review review it, since the novel, or in this case, the collection of short stories, has already been reviewed by scads of people, most of them much more knowledgeable than me. So I am left with the fun job of giving my impression of the writing or the author and reporting a few tidbits of information you may have missed about the author or the time period in which she wrote.

In her short lifetime, thirty-nine years, Flannery O'Connor, only published two novels and several dozen short stories. Yet, she has been revered for her writing skills ever since. Her writing style is known as Southern Gothic, "a style rooted firmly in the American South that emphasizes the grotesque, the horrifying, and the-just-plain-wrong. In the Southern Gothic tradition, it's impossible to look away from life's horrors"(Shmoop). As one reads her stories it is hard to miss the foreshadowing but the reader will probably also notice a feeling of  foreboding. One is told something awful is going to happen and then the whole story evolves into one horrifying mess, little by little. It is a little like watching a movie and when the music gives off this creepy vibe the audience is warned to beware.

The title story, "A Good Man is Hard to Find," the opening line sets the stage for bad things to come: "The grandmother didn't want to go to Florida." And she tries to talk her family out of going by telling them she heard that the Misfit has escaped from prison in Florida. What are the chances of that deterring her family from taking the trip? None. Now here is what makes O'Connor so brilliant, according to the author of The Art of X-Ray Reading, she plants dragon's teeth along the way. In other words consider, "a dragon's tooth as a seed---detail, dialogue, place name--- that will sprout into something significant later in the story. When you see a sign for a town named Toombsboro, the author has planted a dragon's tooth" (Clark 79). The seventeen pages of the opening story are full of dragon's teeth right up to the horrifying conclusion, which, by the way, the reader is prepared for thanks to the hints along the way...and you guessed it, Misfit is part of the ending.

Another story in the collection, "Good Country People" is


as hilarious as the first is horrifying. But other elements are familiar: the culture of the southern countryside, the authentic feel for rural speech patterns, the interesting blend among characters of familiar and bizarre. The channels may be different, but the voices sound as if they are coming through the same radio (Clark 85).

Story titles are helpful little dragon's teeth, too. O'Connor gives her readers little clues to assemble as the story is read. "Ah, here it the title," the reader may exclaim to herself when she finds in the text. In several of the stories the phrase that makes up the title is repeated over and over as in the stories "Good Country People" and "The Displaced Person." It was fun uncovering the titles, especially those which provided clues for the remainder of the story.

No wonder Flannery O'Connor's stories have been read and dissected by so many schoolchildren and college students over the years, they are so rich with symbolism, foreshadowing, and other literary devices. I am guessing that the use of her stories has fallen off in recent years, however, because of her frequent and often disparaging use of the N-word. I get it that she lived in the South prior to the Civil Rights Movement, but that doesn't make repeated use of the term any less egregious. Readers beware.

Flannery O'Connor was a Roman Catholic. She "was at heart a Christian writer, and all of her stories were in one way or another related to the life of Christ. Their religious themes could be difficult for the average reader to spot (Shmoop). In her own writings in Mystery and Manners, O'Connor said, "The universe of the Catholic fiction writer is one that is founded on the theological truths of the Faith, but particularly on three of them which are basic -- the Fall, the Redemption, and the Judgment" (185). Now I am not sure I saw too much redemption in her ten stories in this book, but I sure noticed a lot of falling and judgment.

All in all I am glad for a chance to read this author and a book that is considered one of the 75 best books of the past 75 years. But I am with TS Eliot who was "quite horrified by her stories." Even though, I still want to read more of them in the future.

O'Connor, Flannery. A Good Man is Hard to Find and Other Stories. New York: Harcourt and Brace. 1984. Print. 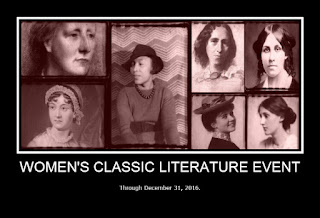 Read a classics book, if for no other reason than you will feel good about yourself when you are done!

Posted by Anne@HeadFullofBooks at 2:35 PM