The Lie Tree by Frances Hardinge 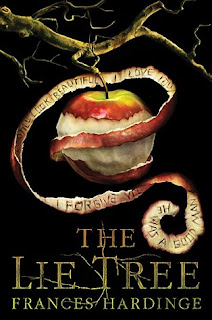 The Lie Tree by Frances Hardinge is tale with layers to explore.

On the surface the story is about a family, set in Victorian Britain, interested in scientific exploration yet taunted by rumors and lies which could ruin them all. Faith, the teen daughter of Erasmus Sunderly, a clergyman turned scientist, is forced to live a double life. She is interested in science and math, pursuits not encouraged for young ladies of the day. Therefore, Faith is forced to keen and secretive observer of things that interest her. She knows secrets no one suspects of her. For example, she knows why her family suddenly moves to Vane, an island off the coast which has an interesting archaeological dig site. She has figured out that her father is running away from Kent and the damning rumors reported in the newspaper. Not long after the family arrives on Vane her father dies and Faith is convinced he was murdered. She looks through his papers to try and discover any information which might lead to the murderer and uncovers an unusual discovery: a tree which only grows in the dark and feeds on lies. Faith decides to feed the tree so it will bear fruit, fruit which will help uncover hidden truths. But lies have a life of their own, often outside the control of the liar herself.

Below the surface, there are rather profound messages in The Lie Tree. It is hard to ignore the message that Hardinge gives her readers about women in the Sciences or other intellectual pursuits. Even her father, whom Faith admires, has this to say on the subject, "Listen, Faith. A girl cannot be brave, or clever, or skilled as a boy. If she is not good, she is nothing. Do you understand?" Yet, it is Faith's ingenuity and curiosity, not her brother's, which saves his reputation in the end. Hardinge also includes information about some of the rather silly aspects of science of the day: after-death photography, treating left-handed children as if they are wrong, and craniometry, which is measuring the size of the skull and assigning higher intellect to those with larger skulls. The doctor and local carniologist tells Faith that women aren't as intellectual as men because of the inferior size of their skulls. Yet her mother, who on the surface seems to espouse these statements about women, tells Faith, "Women find themselves on battlefields just as men do. We are given no weapons, and cannot be seen to fight. But fight we must, or perish." Faith's mother and other women on the island who all seemed to be enemies or against discovering the truth that Faith was seeking, ended up being allies in the end. Faith learned a valuable lesson about not assuming things about people based on rumors and first impressions.

The deepest level in The Lie Tree deals with TRUTH and LIES. The lie tree only grows in the dark and when it is exposed to the light it bursts into flames and burns up. This implies that lies are like fire, the slightest bit of wind or fuel can fan the flames. These flames may get out of control easily. Lies are certainly that way. Once a lie is spoken aloud it takes on a life of its own. The only remedy is to always be truthful. "Oh what a tangled web we weave, when first we practice to deceive" (Sir Walter Scott).

The Lie Tree won the Costa Book Award for 2015 in United Kingdom. This award is given to the best books written by authors in UK and Ireland. Because of its spectacular writing and deep symbolism I think this book will certainly be considered by the Printz committee here in the US this year.

Source: Print version checked out from the public library.

Posted by Anne@HeadFullofBooks at 11:39 AM