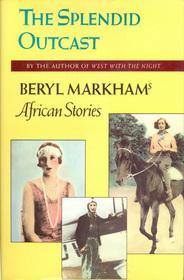 As you know, if you are a faithful reader of this blog (does such a person exist? I don't actually know.) Anyway, if you have read my blog infrequently over the past several months, you should have noted that I have been on an African kick. It started with Circling the Sun by Paula McLain, which led to West With the Night by Beryl Markham, a look at Out of Africa by Isak Dinesen (the movie and a bit of the book) and finally to The Splendid Outcast, African Stories also by Markham.

The Splendid Outcast was published in 1987, after Markham had died. Each short story highlights events that Markham either experienced herself or she drew from her own experiences and just made them into a fictional account. Markham's biographer, Mary S. Lovell, commented before each story with information about what was happening in Markham's life at the time the story was written, where it was originally published, and if the story was drawn from Markham's own life how the facts were altered. I found these editorial comments very helpful. In addition, Lovell wrote a lengthy introduction to the collection which I also found insightful and helpful in understanding Markham. Even though Markham wrote West With the Night about her own experiences growing up in Kenya, becoming first a horse trainer and then an aviator, she didn't give many us many details about her personal life. Lovell fills in a few blanks here. Among the most interesting to me was Lovell's assurance that Markham did indeed pen West With the Night, not her third husband, as some scholars believe.

The Splendid Outcast is a collection of eight short stories, four of them were written in the 1940s by Markham with editing help from her husband. her best stories are about horses and horse racing. Three of the stories were probably written by her husband but with material he had gleaned from Markham. The quality and descriptions were quite different that the other five stories, not really as good. The last story, "The Quitter" was written by Markham herself without editing help from her husband. It was published in 1946 and may have been written for purely financial reasons. It, too, wasn't as good as the first four stories in the collection. Apparently Markham and her husband, Raoul Schumacher, made a good writing team, and when one or the other wasn't involved the effort fell a bit short.

My favorite story in the collection is "The Captain and His Horse". In the story, which I think is actually true, Beryl is allowed to ride a captain's horse, Baron, out with the hunting party. Beryl was quite young. The Baron is so smart it is easy to assign human intelligence to him. In fact, because of Baron's quick intelligence and action Beryl is saved from sure death. Here is a quote from this story, a brief descriptive paragraph about the colors of Africa which I think is simply spectacular,


"To say that it was a clear day is to say almost nothing of that country. Most of its days were clear as the voices of the birds that unfailingly coaxed each dawn away from the night. The days were clear and many-colored. You could sit in your saddle and look at the huge mountains and at the river valleys, green, and aimless as fallen threads on a counterpane---and you could not count the colors or know them, because some were nameless. Some colors you never saw again, because each day the light was different, and often the colors you saw yesterday never came back."

Oh man, that quote just gives me shivers it is so lovely. I wish I had the ability to write as well as Markham so when I see that special sunset, or the light dappled through the leaves, or the animal squinting in the sun, I could capture the moment with such beautiful prose.

I don't know how easy this book is to find. I found a copy at a used bookstore in a neighboring town. Check your public library, perhaps thy have a copy you could borrow.

My rating, a 4, is because of the inconsistent quality of the writing. I liked all the stories but I loved the writing on only the first four.

Source: print, I purchased the book.

Posted by Anne@HeadFullofBooks at 11:59 AM