The Memory of Light by Francisco X. Stork 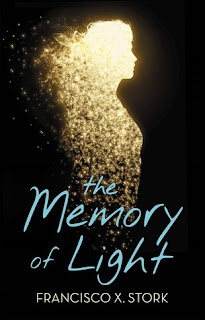 Vicky Cruz wakes up in the mental health ward of the hospital the day after she attempts suicide. The feelings that led her to attempt killing herself are compounded because now she feels even more like a failure: she can't even kill herself. Fortunately for Vicky she is assigned a very caring doctor, Dr. Desai, and she meets other teens who are also struggling with mental health issues. Cautiously and together they can all make progress toward restored health first in the hospital setting and next at Dr. Desai's ranch outside of town.

"Inspired in part by the author's own experience with depression, The Memory of Light is the rare young adult novel that focuses not on the events leading up to a suicide attempt, but the recovery from one — about living when life doesn't seem worth it, and how we go on anyway."-from the publisher

I have been sitting on this review not for weeks but  for months since I read the book back in February. Why? I have very conflicted feelings about it.

Francisco Stork is one of my favorite YA authors.  His characters all seem authentic and his situations all seem realistic and handled with care, if that makes sense when referring to situations in books. As I started The Memory of Light the prose just swept up from the page and I was entranced. Here are a few examples of Stork's writing:

“It's a sadness that has been knocking at my door for a long time, and I finally let it in.”

(Dr. Desai shares with Vicky that sometimes she will have pretend, in the 'fake it till you make it" mode.)

“The rocks are everywhere. You have to dig around them without getting pissed at them. I expect the rocks to be there. Sometimes I think they're put there on purpose so I can learn not to be angry about them.”

(Vicky and another patient are asked to repair a fence but digging the post holes is very hard work because of the rocks. The other patient is philosophical about it here.)

“You are not the clouds or even the blue sky where clouds live. You are the sun behind them, giving light to all, and the sun is made up of goodness and kindness and light.”

(I can't remember the context for this quote, but it is just lovely, lovely prose.)

So where is the conflict? Why am I not just gushing about this book? Why did I delay this review for so long?  After Vicky and the other patients have run out of time for treatment in the hospital, they are all invited to come and live on the Doctor's ranch so they can continue their group therapy and put in some hard work to keep them grounded in this world.

Would such a thing ever happen? Is it even ethical?

Of course it was a literary technique to advance the plot and to help us see other sides of the characters but I just couldn't suspend my disbelief on this point long enough for it not to bug me. It especially bothered me when Mona stops taking her medications without the Doctor's knowledge. As you can imagine, bad things happen because of it, too.

In the end, Vicky isn't healed but she has some tools she can use if she even starts to feel swamped by depression again.

The book is remarkable in the way it speaks the truth. You can just tell. Stork admits in his Afterward that he himself has struggled with depression and he wanted to reach out to those teens who feel alone in their sadness.

As I write this blog post I realize I have very positive feelings about the book and really will recommend it to my teen readers. In fact, I might even consider it for one of our Mock Printz selections. Lucky I finally got around to writing this review. It helped me clear my head!

Rating: 4 of 5
Source: Audiobook obtained from the public library

Posted by Anne@HeadFullofBooks at 4:12 PM