The Secrets of Mary Bowser by Lois Leveen 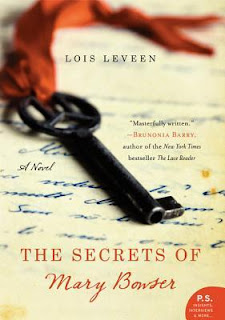 Mary Bowser was a slave in Richmond, Virginia prior to the Civil War. Her owner, Mrs. Van Lew, freed all her slaves at the urging of her daughter Elizabeth after her husband's death. Elizabeth made arrangements for Mary to live in Philadelphia, where she went to school and furthered her education. At some point Mary returned to Richmond, as a free black woman and married Wilson Bowser just a day before the start of the Civil War. Working alongside her former owner Wilson and Mary participated in efforts to thwart the Confederacy. At some point Mary was placed in the Jefferson Davis household as a servant where she worked at a spy for the Union. No one in the Davis household suspected that a colored woman could read or think so they were not careful to shield their papers or conversations from her. Working through a network of other spies, Mary would pass on information she had gleaned from Jefferson Davis in the Grey House.

Not much is known about Mary after the Civil War as records of individuals who assisted the Union were destroyed so as to preserve their anonymity. But in 1995 she was recognized by the Military Intelligence Hall of Fame with these words,


"Ms. Bowser certainly succeeded in a highly dangerous mission to the great benefit of the Union effort. She was one of the highest placed and most productive espionage agents of the Civil War." (American Civil War Story)

Lois Leveen, the author of The Secrets of Mary Bowser, is described as a person who dwells in the spaces between literature and history (Leveen). She was able to take the outline and fragments of what is known of Mary Bowser's life and make a very interesting and satisfying novelization of details to fill in the holes. This gives the reader a sense of the accomplishments of a true, yet little known, American hero and spy.

The Secrets of Mary Bowser also seems to be the type of book which would lend itself to classroom use or study. Leveen lists a few themes which emerge from the text: the power to overcome stereotypes; the power of education and reading; the ability to act for the benefit of the larger community; parental expectations and determining a personal path; learning to work with people who are different than you; and the role women played in American History (Leveen Teaching).

When we selected The Secrets of Mary Bowser for our July book club meeting none of us knew more than the briefest of outlines of the storyline. Yesterday when we met to discuss the book we all unanimously praised the book and the subject. This is rare. Usually at least one person in the group will find fault in the book of the month. If there was any criticism it was mild---the book is quite long, 453 pages. The portion of the story focused on the spying didn't begin until around three quarters of the way through. But that said, much of the back story was necessary to understand Mary Bowser's motivations and her genius. All in all it is a delightful and insightful book. We are all glad we read it. And I would recommend it for any reading group or book club as it really  lends itself to discussion.

(A side note, the length of the book, 453 pages, qualifies for my Big Book Summer Reading Challenge hosted by Sue at Book by Book.)

Source: print edition checked out from the public library.

Posted by Anne@HeadFullofBooks at 10:35 AM