Where do I start? How can I dissect this wonderful book, Unbecoming by Jenny Downham, and do it justice?

First let's look at the title: UNBECOMING. It sounds like something my grandmother would have said to me when I wore an outfit she didn't like. "That dress is unbecoming on you." It is not really a term one hears often these days. This is how it is defined---

How about the cover? Can it tell us anything? Let's take a look: 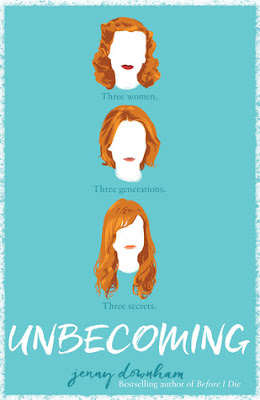 Three women, three generations, three secrets. Hmm? A mystery that involves three generations of women. But wait, three women? Could this also be symbolic? The maiden, mother, and crone archetype representing the three phases of womanhood, or the triple goddess who provides opposing balance to the male essence. Perhaps we are on to something here. We have a multi-generational mystery involving three women and until it is solved, their combined power or essence won't actualized. Each woman separately is "unbecoming", but together they are "becoming."

The term "becoming" has two definitions: 1. The adjective form of the word means flattering, as in a person's appearance. Certainly the three women with their ginger-colored hair are all attractive. But as we know when worry-lines decrease and smiles increase everyone looks more lovely.  2. The noun usage has to do with the process of coming to be something or passing into a state. The act of coming together allows each woman a chance at transformation, where she can pass into a new state and a new place. I love it. This totally explains everything about the book, at least in the most ethereal of terms.

What all this analysis doesn't do it deal with specifics and since the books is a mystery, I don't want to reveal too many details and wreck things for you. Let's just say this. Kate, the maiden, has to find a way to accept and love herself even though she finds herself attracted to other women, not men. Caroline, the mother, has to be willing to let go of her anger and forgive her mother, the crone, for a lifetime of supposed slights. Mary, the crone, has a memory which is dissolving. Before it goes completely she has something important to say or do.

The book is lovely, lovely, lovely. It is the best LGBT book I've ever read without it being a LGBT book specifically. (Let's just say, some people act very unbecoming about that issue in the book.) The family mystery, though not edge-of-you-seat stuff, is certainly compelling and drives the narrative. The characters all show tremendous growth which is satisfying and necessary to the conclusion. My only quibble: the book is long. It is nearly 400 pages in length which will be a deterrent for my teen readers. I listened to the audiobook and I thought it would never end at 14+ hours of listening. There is not much anyone can do about the length now except give themselves permission to speed read through sections or turn the speed up to 1.25 on the audiobook (which is what I did.)

I will definitely purchase this book for my library and will add the LGBT tag to the catalog markings so students can find their way to it. I will also consider it for a Mock Printz selection in the Fall.

Source: Audiobook checked out via Hoopla, a service provided by my public. library.

Posted by Anne@HeadFullofBooks at 10:39 AM