The Great American Whatever by Tim Federle 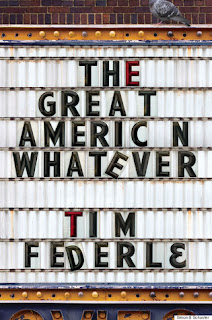 Quinn Roberts is a 16-year-old high school student who loves to write movie scripts in which his sister, Annabeth, and his best friend, Geoff, collaborate, or, I should say, collaborated. Five months earlier Annabeth died in a car crash outside of school and Quinn has been so deeply immersed in grief since that time he has become a total recluse. But Geoff is finally able to drag Quinn to a college party where he meets a guy, a hot guy, and suddenly the mood starts to shift.

Quinn decides to come out to his friend and his mother, even though both knew he was gay already. He starts to care about his hygiene and his mother's health. It is as if he is emerging from a long dreary winter. Yet Quinn can't shake the feeling that his sister's death is somehow his own fault. It haunts him to think that his last text to her may have killed her.

I like The Great American Whatever by Tim Federle and will certainly encourage my students to select it for their reading. Quinn is a smart-mouthed, snarky kid and I am sure many teens at my school will appreciate his attitude and understand his dilemma concerning his sister.

Unfortunately for this book, I listened to it just days before I listened to We Are the Ants by Shaun David Hutchinson, which I think is a superior book. And, in a lot of ways, the books are similar. Both books deal with a depressed, homosexual teen boy. Both boys are having trouble coping with the death of a beloved friend/relative. Each boy lives in the household headed by their mother because the fathers have abandoned them. And finally each boy starts to emerge from their funk because of the attention of another gay teen and as their lives start to surface, each finds solace from their pen and writing. Hmm. I guess you can tell why I am a bit confused as I try to think of these books as separate entities. Not helping my cause is the their juxtaposition in terms of reading them one after the other.

That said, I do want to encourage you and others not to brush this book aside. There are a lot of positive, important messages in this book especially about the transformative power of friendship.
Do I think this book is Printz-worthy? No, honestly I don't. But, as I've said before, that doesn't mean it isn't an awesome book worthy of being read and shared.

Rating: 3.5 out of 5
Source: Audiobook from the public library