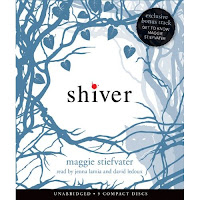 I really didn't expect to like Shiver by Maggie Stiefvater as much as I did.  It is a love story between a girl, Grace, and a werewolf, Sam.  If that doesn't sound hokey, I don't know what does.  But somehow it works and the story has some really magical and surprising moments. I listened to this in the audiobook format and it was delightful.  Jenna Lamia read the part of Grace and David Ledoux read Sam's chapters. I always enjoy it when the reader doesn't have to read opposite sex parts causing them to use a funny voice to pull it off. Both Jenna and David made credible teen voices, too.  Nothing worse that having a teenager sound like an old man or woman.  Ha!

In alternating chapters Grace and Sam tell their story of emerging love. In Shiver werewolves aren't the horrid creatures who emerge on moonlit nights and run around trying to bite everyone, rather they are human during the warm month and wolves during the cold months. At the point in the story when Sam and Grace meet as humans the temperature is dropping daily and both of them know that they are battling time until Sam changes to his wolf form.  They have to work pretty hard to keep him warm to prevent that change. Their story gets more complicated when another boy from school is bitten and one of Grace's best friends and his sister get involved in all the drama that ensues. Get out your hankies, though, there are some very touching, sad moments in the tale.

Maggie Stiefvater said, in the interview on that last track, that she set out to write a tear-jerker!  She certainly had me in tears at several times.  She also identifies herself as a musician and definitely incorporated music and poetry into the storyline.  I always like those little touches when I'm reading a book.

Since several of you have told me that you are eager to read my review because you have to book on you TBR pile I don't want to spoil anything but I think I would be remiss if I don't put up a mild word of caution. This book is for older teens and there is some mild sexual situations.  I hope you enjoy it as much as I did!

Posted by Anne@HeadFullofBooks at 6:03 PM

Email ThisBlogThis!Share to TwitterShare to FacebookShare to Pinterest
Labels: book reviews-YA, Books in a series