Second time around: Looking for Alaska

I took three books with me on our European vacation but read five. I picked up one of the other books, Looking for Alaska, at the lending library in Siena and borrowed the fifth book, The Curious Incident of the Dog in the Night-time, from my daughter after she was finished with it. Both Looking for Alaska and The Curious Incident of the Dog in Night-time were rereads for me but I enjoyed them the second time around as much as the first. I rarely reread books only because there are so many good books out there why take the time to look back? Yet, I am really glad that I did take the time on both of these books. 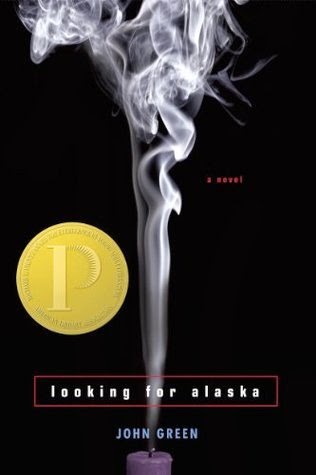 Looking for Alaska was John Green's first book and it won the Printz Award. It was published in March of 2005 right around the time that I was changing up my career from classroom teacher to high school librarian. I had read very little current YA literature up to that point and needed to consume a lot of it quickly so that I would be able to make recommendations to my patrons. Looking for Alaska was one of the books I picked up early on after I became a librarian. It blew my socks off. As soon as I could I read his second book, The Abundance of Katherines, which was also an award winner. With those two books under my belt I was firmly in the John Green fan club camp. I've read almost everything he has written, even his not oft-mentioned short story, Let It Snow. When The Fault in Our Stars was published to so much acclaim I started wondering if it or Alaska was the better book and started thinking about a reread to help me answer the question.

With the reread of Looking for Alaska I wasn't able to determine which book was the best, but I was reminded about how much I like it. When I popped over to John Green's Webpage a minute ago I discovered that I am not the only one that loves this book. Several people wrote him fan letters YESTERDAY about how much they love the book. These fans are from all over the world. I'm grabbing the book's summary/teaser from Green's page in case you don't even know what the book is about:


Miles Halter is fascinated by famous last words–and tired of his safe life at home. He leaves for boarding school to seek what the dying poet Francois Rabelais called the “Great Perhaps.” Much awaits Miles at Culver Creek, including Alaska Young. Clever, funny, screwed-up, and dead sexy, Alaska will pull Miles into her labyrinth and catapult him into the Great Perhaps.- JG Webpage

Green is the master of taking a theme and threading it throughout the storyline. In this case he takes "last words" and "Great Perhaps" and weaves them in to all parts of the story in such a way as to add texture and beauty to the prose. In the end I found myself sighing due to the way that he drew them all together.

Here are a few quotes to give you the flavor of Green's writing. No spoilers, I promise:


“I wanted to be one of those people who have streaks to maintain, who scorch the ground with their intensity. But for now, at least I knew such people, and they needed me, just like comets need tails.”

“It always shocked me when I realized that I wasn't the only person in the world who thought and felt such strange and awful things.”

“They love their hair because they're not smart enough to love something more interesting.”

One word of caution. Looking for Alaska is truly a high school (or beyond) book. It contains lots of mature themes: sex, drugs, death, and foul language. I would be hesitant to recommend it to younger teens, though, according to his fan page, many of his readers are younger teens.

I thoroughly enjoyed this reread of Looking for Alaska and highly recommend to anyone for a first or second go around.

Later, in PART 2, I will talk about my second reread, The Curious Incident of the Dog in the Night-time, so come on back. in the meantime join in the conversation.  Do you ever reread books? What has your experience been with rereads?

Posted by Anne@HeadFullofBooks at 5:00 PM