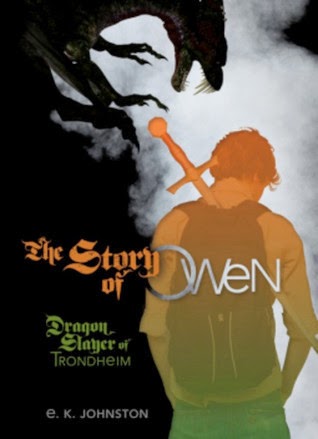 Siobhan, the story's narrator, meets Owen Thorskard the first day of school their junior year when he asks her how to get to English class. They are late to class and have to serve a detention together. Thus begins a friendship between Siobhan, a Band geek, and Owen, nephew and son of famous dragon slayers.

Imagine our world and our history where everything is pretty much the same as it is today with one huge difference---dragons exist and they also thrive on fossil fuels. Mankind is forced to spend a goodly amount of its energy defending themselves against these dragons to preserve these fossil fuels. Dragon slayers defend cities and important installations but rural areas are usually left unprotected. When Owen and his dragon slaying family move into Trondheim, a small village in Ontario, Canada, everyone is delighted. Now, surely, they will be safe from dragon attacks. But instead of being safer it seems that there are more and more dragon attacks. What is going on?

Siobhan is asked by Owen and his aunt Lottie, the most famous dragon slayer since St. George, if she would join the team as Owen's bard. Bards are the people who do the story-telling and music-making. In today's language a bard would be a PR representative for a famous person. The person who controls the media. Siobhan agrees and thus begins her work as a dragon slayer's bard. In old fashioned terms she would be called a troubadour. "Listen! For I sing of Owen Thorskard: valiant of heart, hopeless at algebra, and the last in a line of legendary dragon slayers."

The Story of Owen, Dragon Slayer of Trondheim #1 by EK Johnston is very clever. Take any point in history, insert dragons, and that history is fractured. For example, why have so many people left Michigan? Dragons were attracted to it because of all the factories where automobiles were made and all the exhaust that cars emitted and soon there are too many dragons and the state must be evacuated. Why were parents worried about the effects that the Beatles had on their children? Because the Beatles never mentioned dragons and how to keep safe from their attacks, of course.

Parts of the story drag a bit as EK Johnson is building the dragon-filled world and introducing us to its cast of characters. For example, the first dragon flight doesn't happen until around half way through the book. But other than that it is quite a clever, exciting story. It is also, refreshingly, not stuffed full of teenage drama or romance. I'm hoping this fact will make the book more attractive to male readers who just want a good-old-adventure story. I know it is the first book in the series by the title and by the end of this book I was ready for more dragon-slaying tales. As Dan Kois, writing for the NYT Sunday Book Reviews, says: "The promising Story of Owen is a clever first step in the career of a novelist who, like her troubadour heroine, has many more songs to sing."- May 9, 2014, NYT, Sunday Book Reviews

The Story of Owen will definitely make it onto my list of recommended books for our Mock Printz event this Fall.

Posted by Anne@HeadFullofBooks at 9:11 AM