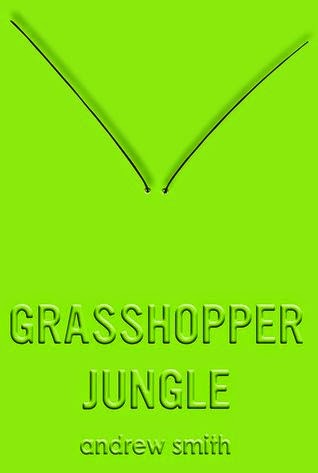 Grasshopper Jungle by Andrew Smith is quite clearly one of the most talked about Young Adult novels of the year. Now I know why. It is "a rollicking tale that is simultaneously hilarious and creepy" (NYT).

In the opening lines of the book we learn humans are "genetically predisposed to record history" and that is what Austin Szerba, our narrator, does. He writes down everything...everything that is happening around him as the end of the world comes into view. He not only writes about the events that led up to the night when he and Robby inadvertently set into motion a chain reaction which releases a plague strain into their community, but he also writes about his confused feelings toward both his girlfriend, Shann, and his best friend, Robby. He spares no details when it comes to the working of the teenage male brain, either. This is a sci-fi apocalyptic coming-of-age story all rolled into one tale.

Here are just a few lines from the editorial reviews of the book:


This raunchy, bizarre, smart and compelling sci-fi novel defies description – it's best to go into it with an open mind and allow yourself to be first drawn in, then blown away. ---Rolling Stone

If you appreciate kooky humor, sentences that bite, and a nuanced understanding of human beings’ complicated natures and inexplicable actions, then you, too, will love Smith’s bold, bizarre, and beautiful novel.—The Boston Globe

The end of the world comes with neither a bang nor a whimper but with a dark chuckle and the ominous click-click of giant insect mandibles in this irreverent, strangely tender new novel by Andrew Smith. This but hints at the intricately structured, profound, profanity-laced narrative between these radioactive-green covers.—The Washington Post

No author writing for teens today can match Andrew Smith’s mastery of the grotesque, the authentic experiences of teenage boys or the way one seamlessly becomes a metaphor for the other.”—BookPage, Top February Teen Pick

How lucky we are that it gets marketed with the label "Young Adult." Because of that, it'll get banned and challenged and more teens than ever will actually read it. I needed this book 22 years ago when I was 16. I have a hunch there are some 16 year olds around who still do.   ---Aaron Hartzler, author of Rapture Practice

The Aaron Hartzler quote leads to my dilemna. If Grasshopper Jungle is one of the best YA novels of the year, then it will surely be considered for the Printz Award. If it will be considered for the award, then I should certainly contemplate adding it to our Mock Printz list of books for 2014. But the book is raunchy. Read between the lines when I say "spares no details when it comes to the working of the teenage male brain."

What is a public school librarian to do? I want to include this book for its literary merit but I dare not for fear that the whole Mock Printz workshop gets axed by angry parents when they find out what kind of "smutty books" (Music Man reference) I am handing out. If it were just up to me I'd be willing to stay with Grasshopper Jungle even though it is full of confused sexual feelings, a pooping dog, horny man-eating praying mantises and more. But on this one, I'm thinking my hands are tied. The book will remain in the library, I just won't recommend that we include it on the Mock Printz list.

Have you read Grasshopper Jungle? Can you give me any advice to ease my dilemna?

Posted by Anne@HeadFullofBooks at 9:11 AM