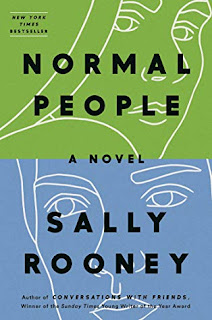 
Marianne answers the door when Connell rings the bell. She's still wearing her school uniform, but she's taken off the sweater, so it just her blouse and skirt, and she has no shoes on, only tights.


He kept thinking of himself saying to Marianne in bed: I love you. It was terrifying, like watching himself committing a crime on CCTV. And soon she wold be in school, putting her books in her bag, smiling to herself, never knowing anything. You're a nice person and everyone likes you. He took one uncomfortable breath and then threw up.

Summary: Marianne and Connell grow up in the same small town in Ireland and attend the same school but that is where the similarities end. She is rich but a loner while he is poor but popular. Connell's single mother cleans Marianne's house twice a week. In the first quote Connell is dropping by the house to pick up his mother after her shift is over. Because Connell is often in her house he and Marianne start to interact with one another, but at school they behave as if they don't know one  each other. Often what they talk about it grades because both of them are good at school and get top marks. At one point Marianne confesses that she likes Connell. This comment leads eventually to a whole clandestine sexual relationship between the teens, while they still maintain the rouse of not knowing each other while at school. In the second quote Connell's friends have been teasing him when he realizes what he's done. He's fallen in love with a social outcast. The thought makes him sick.

A year later Marianne and Connell are off to college in Trinity College in Dublin. After ending their "friendship" the two never see each other at college until they end up at the same party. Now Marianne is the popular person and Connell is the one who has trouble making friends. For the next several years their relationship waxes and wanes. they are drawn to each other and then break apart. Over and over. It also becomes evident that Marianne is becoming more and more destructive with her body and Connell is having trouble with his mental state. Can they save one another?

Review: I was pretty excited to read this book after I saw it on lots of end-of-2019-best-books lists. I thought it was a fun premise that the roles of these two "friends" would reverse after high school. What I wasn't prepared for was all the sex. Lots and lots of it. I kept checking to make sure the book was truly written by a woman because it seems like only a male author would be so obsessed with sex scenes. And then the sex morphed into sadomasochism. Thankfully, those bits aren't very graphic. As the story opens up we learn why Marianne expects to be dominated by men and it is a pretty sad situation.

I listened to the audiobook of Normal People read by Aoife McMann who has a lovely Irish brogue. I simply loved the listening experience. I also devoured the book. Though I was horrified by the negative turns the book took, I was compelled to listen as fast as I could which meant I sat for hours listening yesterday, barely moving a muscle. I thought the title 'Normal People' played a prominent theme in the book, which I like. I like figuring out why an author titles their work with a particular word or phrase. Will I recommend that my book club read this book? No. Will I tell others about it? Probably not. Did I like it? Yes, sort of. There, I am like Marianne and Connell. My relationship with this book will remain a secret.

Oh, by the way, I just noticed that Hulu will be running a TV series of the book this spring. Last chance to read it before it hits the airwaves.

PS. Candyce at The Book Duchesses: I cannot make comments on your blog. I have tried and tried several different times and different ways. Maybe put clearer directions on your blog how to join or open up your blog just a bit to allow other bloggers to comment on your posts.
-Anne
Posted by Anne@HeadFullofBooks at 11:09 AM