TTT: What questions would you ask a favorite author if you could? 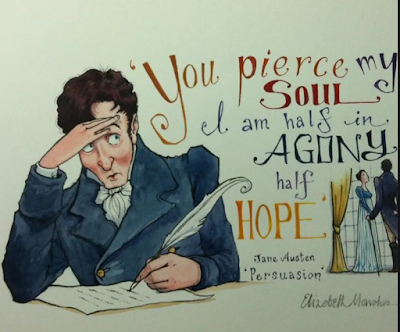 Jane Austen is my favorite author. I have read all the books she wrote and a whole lot of books about her. I still have some questions.

Miss Austen, I am delighted that you are joining me here today. Can I interest you in a cup of tea and a slice of apricot marmalade cake? I understand it is one of your family favorites. (Dinner with Mr. Darcy: Recipes Inspired by Jane Austen)

Let's start with a question I bet no one has ever asked you before. Was tea-drinking popular in your day as it is now in the UK? I read somewhere that the concept of "afternoon tea" didn't really start until the 1840s, (The History of Afternoon Tea) which is several decades after your death. However, I visited Twinings Tea Shop, at 216 Strand Avenue, when I was recently in London and I understand it was opened long before your birth, in 1706. (Original Twinings Tea Shop) Did you and your family drink tea every day or just on special occasions?

Secondly, I'd like to know what you thought or felt about the politics of the day. You were born the year before the American Revolution started and you were thirteen when the French Revolution began, yet you barely mention anything about either of them in your books, if at all. Were you not interested in war as a subject or was a broader reason that women, in general, did not talk about war much? We certainly see glimpses of an interest in the topic of politics in your History of England written when you were a teenager. But that book was meant to be a satire, correct? (The Many Ways...)

Your brother Henry wrote about your writing process after your death, saying that your books sprang from you fully formed. According to him, your “composition” was “rapid and correct,” a flow of words that “cost her nothing,” washing through you to appear, as “everything” you wrote appeared, “finished from her pen.” That isn't true, is it? He was just bragging about a sister he was proud of, I imagine, or felt like he needed to hide something. Tell me about your writing process and why you think Henry wanted to cover up the fact that you had to work at writing, like all authors do. (The Many Ways...)

I am a big fan of the movie made about your relationship with Tom Lefroy called "Becoming Jane." In the movie we are told that you and Tom loved each other and nearly ran off to be married. In the end you stopped it because you knew that a marriage to you, a woman without a dowry, would mean impoverishment for his whole family and they relied on him. Was anything in the movie true? I think I can speak for all Jane Austen fans, we all hope it is true (the love part, anyway!)

Speaking of Lefroy, the wikipedia page about him suggests that you wrote Pride and Prejudice during the same time period as when you two were busy flirting with each other. It also suggests that you patterned Elizabeth Bennet and Mr. Darcy after the two of you. Is that true? If so, were you, personality-wise, more like Elizabeth or Mr Darcy? (Wikipedia)

Everyone has a favorite novel from among your six. What was your favorite of your own books? I vacillate between Pride and Prejudice and Persuasion as my favorites, though I also really like Mansfield Park. Heck, I like them all. While we are talking about favorites, who were your favorite authors/books? (Yarra Plenty Regional Library.)

We enjoyed the miniseries created from your final and unfinished book, Sanditon. But I have a feeling the script didn't go where you planned on taking the book. Please tell my readers the whole plot for Sanditon and how you imagined it at its completion.

Of course, we will never know for certain what disease led to your death but I have seen a suggestion that it was Addison's disease. Take a look at the list of symptoms for that disease. (Mayo Clinic) Did you experience any of those symptoms in your last few months of life? It's a pity that your life was cut short. But perhaps, like Marilyn Monroe and James Dean, your relatively early death has led to part of your mystique that has lasted over 200 years. We love your books but know so little about you as a person.

Okay, just one more question. The home where you lived in Chawton is now preserved as a museum. In one room is the actual desk you used when composing your classic novels. It is so tiny. Did you ever consider getting something larger or did you just spread out onto the dining room table when you needed more space? See photo below. I am not even sure if we should can what you used a "desk." 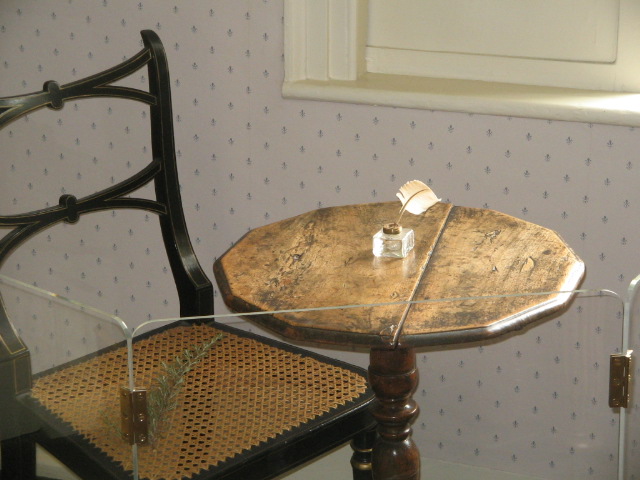 Thanks so much for taking the time to answer my questions. Would you like another slice of apricot marmalade cake before you go? No? Oh, I see. I used too much salt and the apricots taste fake. Yes, well, Thanks again!

Posted by Anne@HeadFullofBooks at 8:30 PM