Review: THE REASON I JUMP 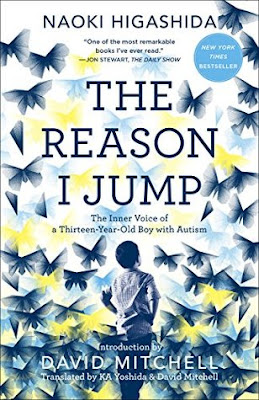 Yesterday was the meeting for one of my book clubs. We sat in the shade of my deck, all of us wearing our masks and discussed an odd book: The Reason I Jump: The Inner Voice of a Thirteen-Year-Old Boy With Autism by Naoki Higashida.

Using an alphabet grid, the severely autistic Naoki Higshida constructs words, sentences, and thoughts about what it is like to be autistic. He cannot communicate with spoken words so he has to painstakingly point to the letters on the grid which a tutor or his parent writes down. In the book Higashida answers questions like,  "Why don't you make eye-contact when you talk to someone?" or "Why do like spinning around?" His answers are insightful and disarming. In response to the question "Why do you jump?" Higashida answers, “The motion makes me want to change into a bird and fly off to some faraway place. But constrained by ourselves and by the people around us, all we can do is tweet-tweet, flap our wings and hop around in a cage.” Higashida talks about how he must do things even though he knows it will make others angry and how that makes him feel. He urges his readers to not give up on him and to be patient and to love him anyway.

In  2007 the book was originally published in Japanese and it was translated into English in 2013 by an Irish author, David Mitchell (Black Swan Green), and his wife, who is Japanese. They have an autistic child and felt compelled to share this amazing book with the English-speaking world.  In the forward Mitchell says the book is proof that the standard definition of autism is wrong, that autism’s obvious restrictions of socialization and communication “are not symptoms of autism but consequences.” He also compliments Higashida for his writing skills. Mitchell has said that Higashida “did the heavy lifting” from the Japanese, and that he “provided the stylistic icing on the cake.”

But when you read the book it seems that Mitchell inserted a lot more than icing on the cake. Higashida who barely mentions anyone other than his mother and a teacher, keeps referring to "we" and "us" as though he is the spokesperson for all autism. It seemed so odd as to be jarring. How could someone who barely recognizes other people speak for everyone? And it made me wonder if Mitchell was inserting his own hopes for his own child into the text, making him an unreliable translator.

Sallie Tisdale, writing for the New York Times, and a mother of an autistic child herself says.


Mitchell writes that reading “The Reason I Jump,” he “felt as if, for the first time, our own son was talking to us about what was happening inside his head.” No parent of an autistic person — and I include myself here — can help longing for such a chance, and looking for it wherever we can. We have to be careful about turning what we find into what we want. (NYT)

That said, the book was interesting and to some degree generated a good discussion though few members had much to contribute from personal experience. Several gals in the group were teachers and all had experienced working with autistic students but none as profound as Higashida. One gal honed in on the section where Higashida talks about autistic people as if they are from another planet or from a different time, sent here with an important message for society. Living inside his head through the pages of the book, one could really see how that was true. He truly seemed to be from a different place or time. We also learned the Higashida, now in his twenties, has gone on to write more books and is a also the author of a blog.